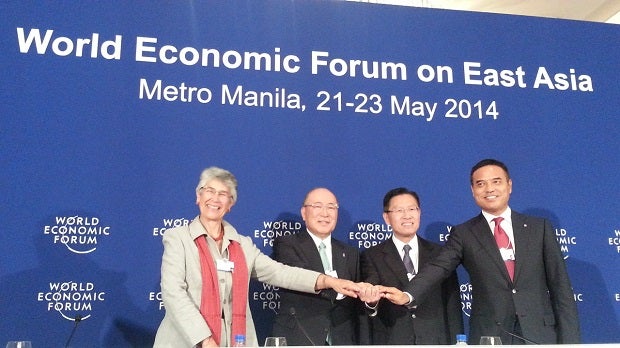 The Co-Chairs of the WEF on East Asia pose during the opening plenary press briefing Thursday. MATIKAS SANTOS/Inquirer.net

MANILA, Philippines—After two days of discussions on economic issues, the more than 600 delegates of the World Economic Forum (WEF) will go home having learned that it’s more fun in the Philippines and that anything can be achieved through hard work.

“They not only say that it’s more fun in the Philippines, they also say, and you will have to forgive my [Filipino] pronunciation, ‘Walang mahirap na gawa pagdinaan sa tiyaga,'” Sushant Palakurthi Rao, Senior Director, Head of South-East Asia, said during his closing remarks Friday.

“Nothing is hard to do if you pursue it with perseverance and the success of this year’s meeting is because of a lot of hard work and perseverance,” he said.

The two-day WEF at Makati City brought business, government, civil society, and academic leaders from more than 30 countries to discuss the various issues facing the region and to come up with possible solutions.

Yolanda Kakabadse, president of the World Wide Fund (WWF) for Nature International and Co-Chair of the WEF on East Asia, thanked the Philippines for sharing the lessons learned in coping with natural disasters.

“Thank you to the Philippines for sharing with us with the lessons they have learned. It has been a very difficult period for the Philippines, but also a wonderful moment to demonstrate to us that you can do it, you can bring sectors together,” she said during her remarks at the closing plenary.

“The response to the crisis in the Philippines has given us a fantastic lesson and I hope that we can replicate that in our own sides of work,” she said.

Kakabadse also highlighted the need to involve more young people given that many countries in the region have young populations.

“We need to involve more young people who are looking at us on how we respond and how we act … and get them more involved not just talking about them as future actors, but as present actors for future problems,” she said.

Takeshi Niinami, chairman of Lawson, Japan and also co-chair of the WEF on East Asia, said he had an “impressive experience” in the Philippines and cited the role of the rising middle class in maintaining growth.

“The region has to go through some challenges [we need to] help deal with the distribution of wealth … the emerging middle class is very important to have sustainable growth of this region,” Niinami said.

“I’m sure that this region, together with rest of the world, will be able to go through these challenges and have sustainable growth. The people is the most important asset we have to think about,” he said.

James Riady, Chief Executive Officer of Lippo Group, Indonesia and co-chair of the WEF on East Asia highlighted the issue of the need for inclusiveness to ensure that the fast-paced growth of the region will be felt by all the populations.

He said that developing nations in the region were facing “income gaps and wealth gaps” that would need to be addressed.

“Inclusiveness is a real issue and may affect all the work done … but during this forum I see that people are talking about it. So you cannot leave this forum without getting the impression that we really have an issue,” Riady said.

“The belief system must be changed. Let’s go back and say that each one of us will do something. At the core of all this would be developing the human capital,” he said.