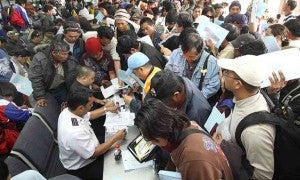 MANILA, Philippines—Crisis Alert Level 2 was raised in Libya Friday due to the deterioration of the security situation in the country.

“The Department of Foreign Affairs [DFA] has raised the crisis alert level for Libya from 1 [precautionary phase] to 2 [restriction phase],” DFA said in a statement Friday.

“Alert level 2 was raised upon the recommendation of the Philippine Embassy in Tripoli due to the continued deterioration of the political and security situation in that country. Filipinos in Libya are advised to limit non-essential movements, to avoid public places, and to prepare for possible evacuation,” it said.

Only Overseas Filipino Workers (OFWs) with existing contracts will be allowed by the Department of Labor and Employment to return to Libya, DFA said.

There are 2,724 permanent, temporary, and irregular Filipinos in Libya as of December 2012 according to records of the Commission on Filipinos Overseas.

The large majority, 2,572, are temporary workers, it said.

In Libya, politicians in fear of powerful militias