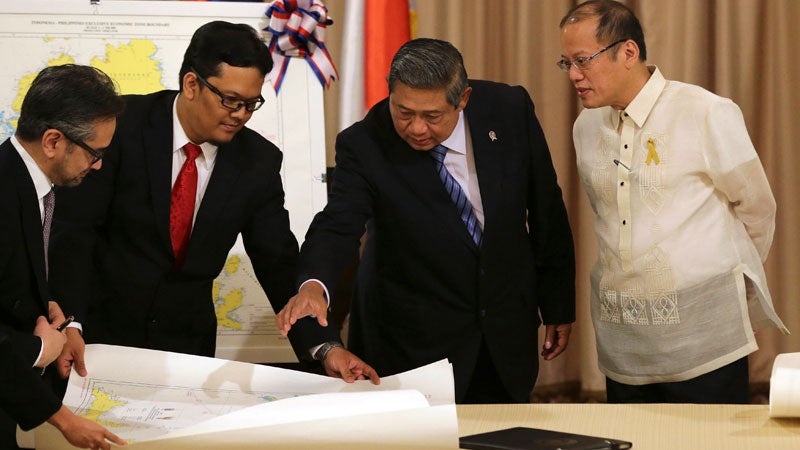 Indonesian President Susilo Bambang Yudhoyono, second from right, points at a map beside Philippine President Benigno Aquino III, right, during a signing ceremony at the Malacanang Presidential Palace in Manila, Philippines, Friday, May 23, 2014. The Philippines and Indonesia have signed an agreement resolving their sea border dispute after 20 years of negotiations as the leaders of the Southeast Asian neighbors vow to forge even closer ties. (AP Photo/Aaron Favila)

MANILA, Philippines- President Benigno Aquino III on Friday considered as a “milestone agreement” the signing of a maritime boundary deal that resolves the overlapping territorial claims of the Philippines and Indonesia.

During a ceremony in Malacañang, Aquino and Indonesian President Susilo Bambang Yudhoyono witnessed the signing of an agreement settling a 20-year-old maritime boundary dispute between the two Southeast Asian neighbors.

“This is a milestone agreement that is founded on the principles of international law, particularly the United Nations Convention on the Law of the Sea,” Aquino said.

He said the deal is a manifestation of the country’s commitment to settle maritime disputes without the use of force and violence.

“It serves as solid proof to our steadfast commitment to uphold the rule of law and pursue the peaceful and equitable settlement of maritime concerns,” he said.

Communications Secretary Herminio Coloma Jr. said “the agreement is the result of a rules-based negotiation between the Philippines and Indonesia to achieve an equitable delimitation of their overlapping exclusive economic zone in the Mindanao Sea, Celebes Sea and the Philippine Sea.”

On his part, Yudhoyono congratulated the Philippines for arriving at a peace agreement in the Southern Philippines.

“That indeed is an important key milestone in history that any conflict, any conflict can be resolves peacefully,” he said.

He said the two countries’ relations at the bilateral level “have been strong, very good and continue to grow.”

Aside from signing the agreement on the maritime dispute, the Philippines and Indonesia also signed a memorandum of understanding on higher education cooperation.

The agreement aims to promote cooperation, higher education, research and training for the mutual benefit of the Philippines and Indonesia.

The two countries also signed a memorandum of understanding on combatting international terrorism which aims to “enhance counter terrorism cooperation between the officials of security, defense, intelligence and law enforcement agencies of the Philippines and Indonesia.”

“These agreements reflect the strong resolve of both our nations to not only deepen our bilateral engagements, but also, and more importantly, enable our peoples to be true partners in achieving prosperity,” Aquino said.

The Philippines is embroiled in a maritime dispute with China over the West Philippine Sea (South China Sea).