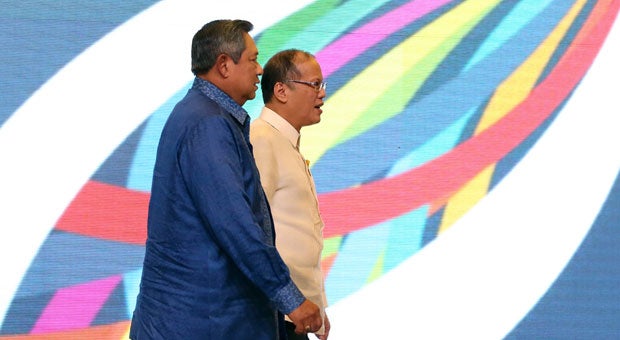 Philippine President Benigno Aquino III, right, walks beside Indonesian President Susilo Bambang Yudhoyono at the Philippine International Convention Center as part of the World Economic Forum on East Asia in Manila, Philippines on Thursday, May 22, 2014. Yudhoyono is in the country for a state visit, during which he is expected to sign an agreement settling a 20-year-old maritime boundary dispute with the Philippines. AP PHOTO/AARON FAVILA

MANILA, Philippines—Indonesian President Susilo Bambang Yudhoyono arrived in the country Thursday for a state visit, during which he is expected to sign an agreement settling a 20-year-old maritime boundary dispute with the Philippines.

The outgoing Indonesian leader spent his first day attending the opening plenary session of the World Economic Forum on East Asia. In his speech, he outlined strategies to help achieve equitable progress.

“The key challenge in addressing inequity is how to ensure that those at the bottom and middle also enjoy the same, if not more, socioeconomic mobility as those at the top; hence, mobility for all,” he told business and political leaders.

“And in this way, it doesn’t matter how many billionaires and millionaires emerge so long as those at the economic bottom also get a ladder to a better life opportunity and progress.”

Yudhoyono was optimistic that equitable growth could be achieved, with education as “the best antipoverty weapon.”

From the economic forum, he is set to hold an expanded bilateral meeting with President Aquino at 9:40 a.m. Friday before signing agreements with the Philippines an hour later.

Both countries earlier completed the final text of a landmark agreement ending two decades of dispute over overlapping exclusive economic zones between the Mindanao and Celebes Seas.

The Department of Foreign Affairs earlier said the accord should serve as an example of how to peacefully resolve disputes, in light of the Philippines’ territorial conflict with China.