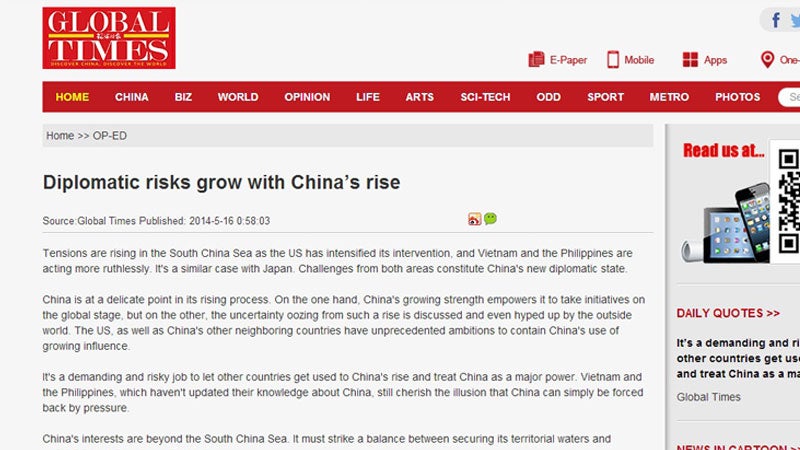 BEIJING – A state-run Chinese newspaper backed the use of “non-peaceful” measures against Vietnam and the Philippines Friday, as it considered the possibility of war in the strategically vital South China Sea.

Vietnam is experiencing its worst anti-China unrest in decades following Beijing’s deployment of an oil rig to disputed waters, with at least one Chinese worker killed and more than 100 injured.

“The South China Sea disputes should be settled in a peaceful manner, but that doesn’t mean China can’t resort to non-peaceful measures in the face of provocation from Vietnam and the Philippines,” the Global Times newspaper, which often takes a nationalistic tone, wrote in an editorial.

“Many people believe that a forced war would convince some countries of China’s sincerely peaceful intentions,” the paper added.

Beijing claims almost the whole of the South China Sea, including areas close to the coasts of other littoral states, and the Philippines has provoked its fury by seeking United Nations arbitration in the dispute between the two.

China’s foreign ministry has condemned both Manila and Hanoi, and accused Vietnam’s leaders on Thursday of “indulgence and connivance” with anti-China demonstrators for failing to rein in the protests.

Xinhua appeared to take a more measured tone towards the confrontation than the Global Times, however, noting that “violence and provocation should never be the answer to disputes between countries, and must be stopped immediately”.