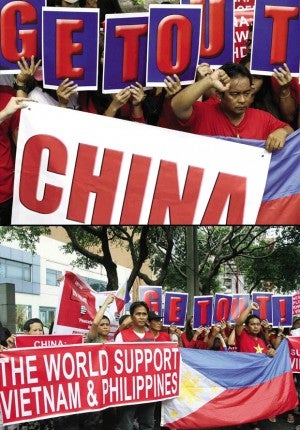 ‘GET OUT, CHINA’ That is the clear-cut message Filipino and Vietnamese expats are sending to China on Friday, denouncing its incursions into their countries’ exclusive economic zones in the South China Sea. In photo below, the protesters call for international support for the Philippines and Vietnam against what the United States calls “China’s provocative, unilateral actions” in disputed areas. AP/BULLIT MARQUEZ

Filipinos and members of the Vietnamese community in Manila staged a joint protest on Friday against China’s incursions into South China Sea territories claimed by their countries.

But an unrepentant China defended its actions in disputed waters amid warnings of war with Vietnam and the Philippines.

Riot police blocked the entrance to a high-rise building in Makati City that houses the Chinese Embassy as the protesters marched toward it.

The protest, which was peaceful, came after deadly riots in Vietnam that Hanoi said were triggered by China’s deployment of a deepwater oil drilling rig in the East Sea, part of the South China Sea within Vietnam’s exclusive economic zone.

Chanting “China get out,” more than 200 Filipinos and Vietnamese picketed the Chinese Embassy carrying banners, including one that urged Manila and Hanoi to “join hands” against Beijing.

China claims 90 percent of the 3.5-million-square-kilometer South China Sea, which is crisscrossed by sea-lanes where a third of annual global cargo passes and where islands, islets, reefs and shoals are believed to be sitting atop vast oil and gas reserves.

Protests against China in Vietnam have turned violent, killing 21 people and injuring scores of others, according to a report by Reuters.

The Department of Foreign Affairs said the Philippine Embassy in Hanoi had gotten in touch with employers of Filipinos to ensure their safety.

There are 5,500 Filipinos working in Vietnam.

Members of the Akbayan party-list group joined the Filipino-Vietnamese demonstration in Makati City.

Akbayan Rep. Walden Bello said the protesters were denouncing Beijing’s moves as provocative. “This protest is all about telling China, ‘Please stop your aggressive moves in our territories. Please respect the rule of international law,”’ he said.

The Philippine National Police Maritime Group this week charged nine Chinese fishermen who were apprehended last week for catching more than 500 turtles near Hasa-Hasa Shoal (Half Moon Shoal) off the island-province of Palawan.

“We are here to protest what China is doing against Vietnam. We need to call on the support of local and international friends,” Arya Nguyen, one of about 60 Vietnamese who joined the protest, said.

“If they (the Chinese government) can do that to Vietnam, they can do it to everybody,” echoed Janicee Buco, a Filipino representative of a community group called Vietnam-Filipino Association.

Buco said the Vietnamese who took part in the demonstration were Philippine-based descendants of Vietnamese boat people who fled with the aim of being resettled in the West after the Vietnam War.

“The Philippines and Vietnam should come together so that China can no longer bully us,” Buco said.

“We hope that this will  send  a warning message to the government of China. They should realize that they cannot do anything they like in the South China Sea. They may have a giant oil rig, they may have big ships and modern weapons, but we have what they don’t have—legality in their actions,” the association said in a statement.

“We also expect that Vietnam and the Philippines will shake hands in dealing with common challenges. We are small and weak countries sharing many similarities. The two countries need to support each other in order not to be bullied by China. If we are divided, China would easily conquer [us] one by one,” it said.

The group intended to hand a letter of protest to Chinese Ambassador to the Philippines Zhao Jinhua opposing China’s moving the oil rig to the East Sea.

Vietnamese and Chinese ships have been locked in a standoff since early this month after Beijing deployed the oil rig near the Paracel Islands claimed by Hanoi.

In Beijing, the Chinese foreign ministry accused Hanoi of “connivance” with protesters who targeted hundreds of foreign-owned factories to oppose China’s deployment of the oil rig.

Hua put the death toll at two, but said authorities were still gathering information on the unrest. Beijing sent a delegation led by an assistant foreign minister to Vietnam on Thursday, she added.

China’s state-run Global Times newspaper turned up the rhetoric with a strident editorial supporting the use of “nonpeaceful” measures against Vietnam and the Philippines.

“The South China Sea disputes should be settled in a peaceful manner, but that doesn’t mean China can’t resort to nonpeaceful measures in the face of provocation from Vietnam and the Philippines,” it said.

“Many people believe that a forced war would convince some countries of China’s sincerely peaceful intentions,” the paper added. With reports from AP and AFP