Glorified by TV, torture is spreading 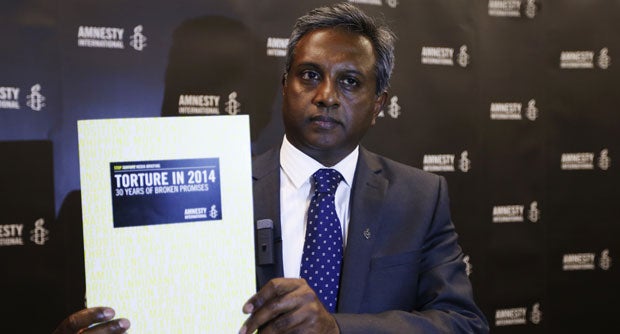 Salil Shetty, secretary general of Amnesty International, poses for the photographers with a copy of a global report on the use of torture, following its launch in London on Monday, May 12, 2014. AP/LEFTERIS PITARAKIS

LONDON—Torture is rampant across the world and has become almost normalized by the “war on terror” and its glamorous portrayal in shows such as “24” and “Homeland,” Amnesty International said on Tuesday.

The London-based human rights group is launching a new campaign aimed at ending torture, which it says remains widespread even 30 years after a blanket prohibition was agreed by the United Nations.

The new campaign focuses on five countries where torture is a particular problem and where the NGO believes it can have the most impact: Mexico, the Philippines, Morocco and Western Sahara, Nigeria and Uzbekistan.

Loretta Ann P. Rosales, who was tortured under the Marcos regime in the Philippines in 1976 and now leads that country’s human rights commission, said there were several reasons why torture continued.

It was seen as a shortcut to get confessions from detainees, a tool of corruption or an instrument of repression, and came from a prioritization of “the need for state security over human security,” she told reporters.

In the past five years, Amnesty says it has recorded incidents in 141 countries, including 79 of the 155 signatories to the 1984 UN Convention against Torture.

The global survey of 21,000 people in 21 countries also revealed a widespread dread of the practice, with 44 percent saying they feared being abused if they were taken into custody.

Yet over a third percent of the respondents said they believed torture was sometimes necessary and acceptable to gain information that may protect the public.

“Since the so-called war against terrorism, the use of torture, particularly in the United States and their sphere of influence…has gotten so much more normalized as part of national security expectations.”  Support for torture ranged widely across nations, from 74 percent in China and India, to just 12 percent in Greece and 15 percent in Argentina, the GlobeScan survey found.

In Britain, which had the lowest fear of torture among all the countries, 29 percent backed its use, a fact Amnesty country director Kate Allen attributed to the popularity of violent, spy-based TV shows.

“Programs like ‘24’ and ‘Homeland’ have glorified torture to a generation, but there’s a massive difference between a dramatic depiction by screenwriters and its real-life use by government agents in torture chambers,” she said.

Amnesty won the Nobel Peace prize in 1977 largely because of its work fighting against torture, and the new two-year campaign is an attempt to revisit one of its core issues.

The group notes how the UN Convention made torturers “international outlaws” and prompted governments worldwide to denounce the practice. But it warns that in reality many are endorsing or at least failing to tackle the issue head-on.

It described police brutality in Asia, where torture is a “fact of life,” and pointed out that more than 30 countries in Africa have yet to make such abuse punishable by law.

Shetty spoke of “the cruelty of inmates in the United States being held in solitary confinement with no light,” of stoning and flogging in the Middle East and of the “stubborn failure” of European nations to investigate allegations of complicity in torture.