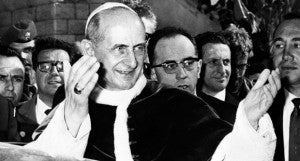 MANILA, Philippines—Filipino bishops on Sunday welcomed the announcement from the Vatican over the weekend that Pope Francis had approved a decree beatifying Pope Paul VI in October, saying the late pontiff was a good shepherd to Catholics in a turbulent time.

“Pope Paul VI was very firm in the teachings of the Church during a time of crisis and turbulence in the world. He was a good shepherd of God’s flock [and] he was also very simple and holy,” said Cubao Bishop Honesto Ongtioco in a text message to reporters on Sunday.

Among world events that took place during his papacy were the assassination of US President John F. Kennedy; the inception of legal abortion, homosexual rights movements and the contraceptive pill; the Vietnam War; and the continuing breakdown of the British empire.

Sorsogon Bishop Arturo Bastes said beatifying Paul VI was a good decision, noting that the pontiff completed the Second Vatican Council, which was started by Pope John XXIII, who has just been made a saint.

“He wrote the prophetic encyclical letter Humanae Vitae for which he suffered very much,” said Bastes, referring to the papal encyclical which reaffirmed the Church’s traditional outlook on marriage and imposed an absolute ban on artificial birth control.

Bastes also noted that Paul VI was the first pontiff to visit the Philippines, in 1970.

“I am very happy for him. It was in his papacy that Vatican II was held. Blessed Paul VI succeeded Saint John XXIII, who opened Vatican II,” said Jaro Archbishop Angel Lagdameo.

On Saturday, the Vatican announced that Pope Francis had recognized the miracle necessary for the late pontiff’s beatification, which has been set for Oct. 19.

According to the Vatican’s Congregation for the Causes of Saints, the miracle was the healing of an unborn child diagnosed with an incurable illness.