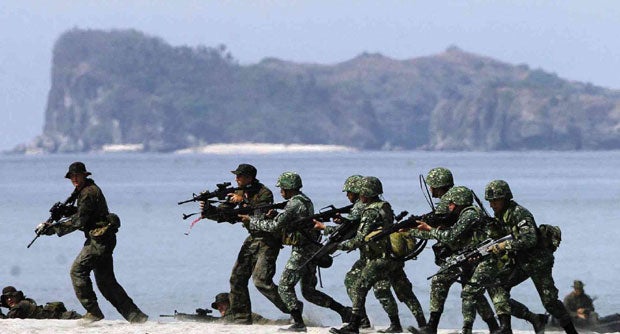 THE VIEW FROM CHINA. US Marines storm a beach along the West Philippine Sea on Friday but only to simulate an amphibious landing during joint US-Philippines military exercises dubbed Balikatan 2014 at San Antonio, Zambales. This year’s war games focus on maritime security. The exercise came even as tensions simmer between the Philippines and China over rival claims to territory in the West Philippine Sea, part of the South China Sea within Manila’s 370-km exclusive economic zone. MARIANNE BERMUDEZ

ZAMBALES, Philippines—Scores of US and Filipino Marines launched mock assaults on a West Philippine Sea beach on Friday in war games aimed at honing the allies’ combat skills.

The exercise came as tensions simmer between the Philippines and China over rival claims to territory in the West Philippine Sea, part of the South China Sea within Manila’s 370-kilometer exclusive economic zone.

Three US rubber raiding craft and two small-unit Filipino riverine boats made repeated sallies at the desolate beach in a practice stealth landing of squads of armed Marines.

Shouting “Volume fire!” and “Bounce up,” the teams scrambled up the sloping shore with assault rifles to surround a mocked-up enemy tent before running back to their boats in rapid maneuvers.

“We’re here for the sake of training, to build up and develop our capabilities,” US Marines spokesperson Capt. Jeremy Scheier said when asked if they had a specific enemy target in mind.

“There was no specific scenario,” he said, adding that Friday’s exercises began well before dawn and involved about 40 US and 80 Filipino Marines.

About 5,500 US and Filipino forces are taking part in the annual war games called Balikatan (shoulder-to-shoulder) over a two-week period.

At the opening ceremony in Manila last week, Foreign Secretary Albert del Rosario said this year’s joint exercises were designed to help the hosts boost their “maritime capability” to deal with “challenges” in the West Philippine Sea.

The Philippines, which signed a Mutual Defense Treaty with the United States in 1951, has been involved in increasingly tense maritime confrontations with China, which claims most of the South China Sea, including waters close to the shores of its neighbors.

The United States has said it was taking no position in the territorial dispute.

But US President Barack Obama, on a state visit to Manila last week, warned China against using force in territorial disputes and said Washington would support Manila in the event of an attack.

In the latest incident on Tuesday, Filipino police detained a Chinese-flagged fishing vessel and its 11 crew members after finding nearly 400 protected sea turtles aboard the boat.

The Philippines has ignored a Chinese demand to free the vessel and crew.

“This was planned years before,” she said when asked if the exercises had any bearing on the latest maritime incident involving China, which the Philippines said occurred near Hasa-Hasa Shoal (Half Moon Shoal) 106 km west of Palawan Island.

“We are inspired because we can see that their commander is exerting effort. This means that the US troops are serious in undertaking this activity,” said Capt. Ian Hermosura, training officer of the Philippine contingent to the joint exercises.

The participants used automatic weapons—M16s for the Filipinos and M4s for the Americans—and 60-mm mortars in the assault.

The US forces also brought in an Osprey helicopter, which is capable of a vertical and horizontal airlift. AFP, with a report from Armand Galang, Inquirer Central Luzon