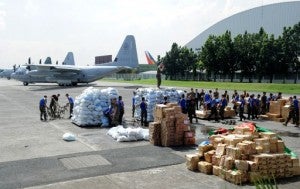 International organizations on Friday pledged more support for rebuilding efforts as they noted encouraging signs of recovery in areas hit by Supertyphoon “Yolanda.” They also acknowledged the massive scale of work ahead and the remaining gaps in the response to the crisis, lapses that even the government’s rehabilitation czar had publicly admitted to this week.

“I think we’ve come a very long way in a relatively short time but please, let’s not forget that there’s a very long road to recovery ahead,” said Carin van der Hor, Plan International’s country director in the Philippines.

Aid organizations working on the ground as part of the early response to the devastation wrought by Yolanda in Eastern Visayas yesterday reaffirmed their commitment to sustain support for the Philippines, as the country faces the long road toward full recovery.

Europe’s funding for recovery efforts in the disaster zone has been programmed for “the next three to four years” to support institutional rebuilding in the area, said Ledoux.

“I know that it’s going to take years. I’m not sure that in four to five months, [recovery will have been completed] … So I will say that in the next three to four years, the European Union will continue to have funds available for this reconstruction effort,” Ledoux said in a forum marking six months since Yolanda swept through Eastern Visayas.

Javad Amoozegar, ACF country director, echoed Ledoux’s statement:  “[We] reassure the communities, the people, that the humanitarian community will continue to support the affected people of Typhoon Yolanda and that we will follow the road to recovery, rebuilding communities with resiliency for next disasters.”

Ledoux described as “good news” the concert held on Thursday night at the Tacloban City astrodome—once the refuge of evacuees from the typhoon.

Asked to comment on the frustration over delays expressed by recovery czar and former Sen. Panfilo Lacson, Van der Hor acknowledged seeing the impact of red tape on the ground but also emphasized that no government could have sufficiently prepared for a disaster of such magnitude as Yolanda, which was regarded by the United Nations as a Level 3 emergency, which is its highest.

“I feel for [Lacson] because clearly, he has been encountering some red tape, so there’s nothing I can say to that. What I can say is that we see the effect of delayed decision making,” said Van der Hor.

“In the communities, I see barangay captains, vice mayors and mayors who really want to move ahead [but] they cannot because they are still waiting for a decision from either the region or the national government,” she said.

“So on a more general level, I can understand that frustration exists. But I would also like to emphasize that we’re only six months in. I would challenge you to find a government that would be much, much, much faster than the Philippine government,” the Plan International official said.

“I’m not saying there are no delays and no red tape because probably there [are], but we need to put it into context … I think it is important that we as a humanitarian community stand by Senator Lacson,” she added.

Van der Hor also confirmed that bodies continued to be recovered around the disaster zone half a year since the typhoon hit.

“We are still finding dead bodies as of today. Because there was such an enormous amount of debris, it is inevitable that we’ll still be able to find corpses,” she said, responding to a question about the death toll.

At least 6,200 were killed in the typhoon and more than 1,000 remained missing after the supertyphoon swept through Eastern Visayas, with winds of up to 315 kilometers per hour that brought storm surges tearing through homes and other structures inland.

“In reality, a lot of people got swept away and we have to accept that some of them will not be found. So I think this will always be a cross to bear for Philippine society. I do not think we will ever know exactly how many people perished,” said Van der Hor.

Local radio broadcaster Alfredo Padernos, meanwhile, said some bunkhouses in Palo town, Leyte province, have started to deteriorate because they remain unoccupied, with people refusing to move in because the shelters are located far from their livelihood.

“People from the coastal areas don’t want to move in because they have no livelihood there … In a way, the houses are deteriorating because nobody is cleaning them. Coco lumber and plywood rot away easily,” said Padernos.

He said he knew of at least one building with 10 units of bunkhouses in such a condition. He said some locals had also started destroying parts of the houses.

“Hundreds of people are still in the tent city now. Some have died because it’s too hot and then it floods when it rains,” he said.

Be transparent with ‘Yolanda’ aid, donors and recipients urged