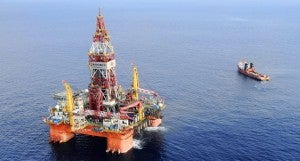 In this May 7, 2012 file photo released by China’s Xinhua News Agency, CNOOC 981, the first deep-water drilling rig developed in China, is pictured at 320 kilometers (200 miles) southeast of Hong Kong in the South China Sea. AP

MANILA, Philippines – The United States (US) called China’s move to put an oil rig in disputed waters off Vietnam “provocative and raises tensions.”

“China’s decision to introduce an oil rig accompanied by numerous government vessels for the first time in waters disputed with Vietnam is provocative and raises tensions,” US Department of State Spokesperson Jen Psaki said in a statement released by the US Embassy in Manila.

“This unilateral action appears to be part of a broader pattern of Chinese behavior to advance its claims over disputed territory in a manner that undermines peace and stability in the region,” she said.

Vietnam protested the presence of the oil rig and escort vessels in the South China Sea (West Philippine Sea) and demanded that China stop drilling operations.

Chinese ships have reportedly rammed and fired water cannons against Vietnamese ships trying to stop the oil rig from getting into Vietnamese territory.

China however maintained that they were conducting the drilling operations within Chinese waters.

Vietnam and China engaged in a brief border war in 1979 over the Paracel Islands that resulted in the withdrawal of Vietnamese troops and China gaining control of the disputed territory.

“We are also very concerned about dangerous conduct and intimidation by vessels operating in this area. We call on all parties to conduct themselves in a safe and professional manner, preserve freedom of navigation, exercise restraint, and address competing sovereignty claims peacefully and in accordance with international law,” Psaki said.

“Sovereignty over the Paracel Islands is disputed; this incident is occurring in waters claimed by Vietnam and China near those islands. These events highlight the need for claimants to clarify their claims in accordance with international law, and to reach agreement on appropriate behavior and activities in disputed areas,” she said.

Read Next
PH maritime industry given time to implement reforms—DFA
EDITORS' PICK
Smart poised to turn PH into ‘Smart 5G country’ with nationwide rollout
New Vatican ambassador to PH named
We don’t want gov’t to fail, because it’s all of us who will suffer and die — Robredo
Duterte keeps Metro Manila under GCQ for entire October
Get 80% OFF Ignite 2020 Cyber Tickets starting 28 September
Water remains our saving grace right now
MOST READ
Duterte keeps Metro Manila under GCQ for entire October
Fernandez: Velasco camp ‘betrayal’ pushes call to retain Cayetano as Speaker
Mayor Treñas tells Locsin: Iloilo City is much better than what you think
Palace: Some cities in Metro Manila eligible for MGCQ
Don't miss out on the latest news and information.