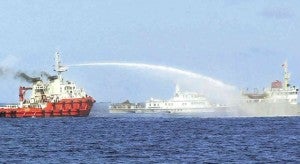 YANGON — Southeast Asian leaders head into a historic summit in Myanmar this weekend dogged by a flare-up of high-seas tensions with China that will test the region’s ability to stand together against a mighty economic partner.

Vietnam and the Philippines, both members of the 10-nation Association of Southeast Asian Nations (Asean), squared up to Beijing this week in the South China Sea, whose waters are scored by overlapping territorial claims.

“China’s actions on the eve of the Asean meeting in Myanmar will put South China Sea issues on the top of the agenda,” said Carl Thayer, an expert on the region at the University of New South Wales.

He said Beijing had been “aggressively assertive” by relocating a deep-water drilling rig in waters claimed by Vietnam and surrounding it with ships, adding it could be a riposte to US President Barack Obama’s recent Asia tour.

During his tour, Obama asserted support for US allies Japan and the Philippines, both locked in their own territorial disputes with Beijing.

Philippine police said Wednesday they had seized a Chinese fishing vessel and detained its 11 crew members elsewhere in the South China Sea.

China said it was in the right in both the Philippine and Vietnam cases.

The sea is crisscrossed by fishing and shipping lanes and is thought to contain huge oil and gas reserves. Parts are claimed by Asean members Vietnam, Brunei, Malaysia and the Philippines, as well as by Taiwan.

China, which asserts sovereign rights to almost all of the disputed waters, wants to negotiate with rivals on a bilateral basis. Other claimants reject that and want a multinational approach.

“Asean is not likely to condemn China by name and will stick to its past formula of upholding international law, rejecting force or the threat of force, and call for an early conclusion of a binding code of conduct,” Thayer said.

He added: “Asean protestations will not move China one inch.”

The tensions threaten to cloud Myanmar’s hopes of using Sunday’s Asean summit as a coming-out celebration, as it emerges from decades of military rule with a new emphasis on economic liberalization.

Myanmar is hosting an Asean summit for the first time, showcasing its remote capital Naypyidaw under the slogan “Moving Forward in Unity to a Peaceful and Prosperous Community”. It is expected to steer a cautious route through disputes with China, a long-time ally.

It has been a member of Asean for 17 years but was forced to renounce the rotating presidency in 2006 because of criticism over its rights record and the then-ruling junta’s failure to shift to democracy.

Reforms since a new quasi-civilian government took power three years ago have seen the removal of most Western sanctions and the promise of an investment boom.

But the prosecution of journalists this year, as well as arrests of protesters and ongoing ethnic minority conflicts, have caused alarm among rights groups.

David Mathieson of Human Rights Watch urged Asean to move beyond its “non-interference policy” and push for a solution to the growing crisis in Myanmar’s Rakhine state, where tens of thousands of Rohingya Muslims have been displaced from their homes by communal clashes with local Buddhists.

Myanmar’s internal problems have taken on a regional dimension after many Rohingya fled in rickety boats to Malaysia, Thailand and Indonesia.

But at a time when other countries in the bloc are under fire for their own rights records — including Brunei’s introduction of sharia law — observers say it is unlikely Myanmar will face much pressure from its neighbors.

The summit will be further overshadowed by the removal of Thai premier Yingluck Shinawatra from office for abuse of power in a court ruling, threatening to plunge the regional heavyweight into further political crisis.