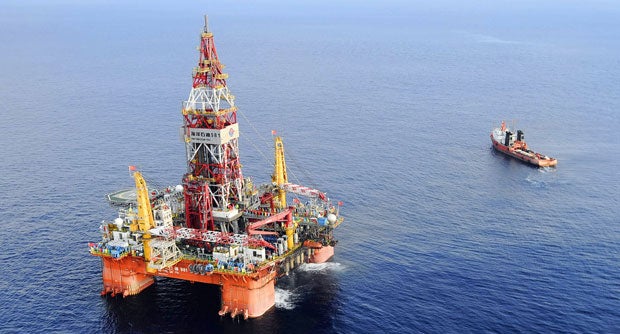 In this May 7, 2012 file photo released by China’s Xinhua News Agency, CNOOC 981, the first deep-water drilling rig developed in China, is pictured at 320 kilometers (200 miles) southeast of Hong Kong in the South China Sea. Vietnam warned China on Tuesday, May 6, 2014, that it would take all necessary measures to defend its interests in the South China Sea if Beijing does not remove the large oil rig from waters claimed by both countries. AP

HANOI, Vietnam — Vietnam warned China on Tuesday that it would take all necessary measures to defend its interests in the South China Sea if Beijing does not remove a large oil rig from waters claimed by both countries.

The remarks represent an escalation of the dispute in one of Asia’s most volatile regions.

China’s stationing of the oil rig over the weekend is widely seen as one of its most provocative steps in a gradual campaign of asserting its sovereignty in the South China Sea.

China’s assertiveness along with its growing military and economic might is alarming Vietnam, the Philippines and other countries in the region that also claim parts of the oil- and gas-rich waters. The United States, which is undertaking a military and economic “pivot’ toward Asia in part to counter Chinese influence, shares the concerns of the smaller nations.

In Washington, State Department spokeswoman Jen Psaki called China’s action “provocative and unhelpful to the maintenance of peace and stability in the region.”

A Vietnamese government statement said Foreign Minister Pham Binh Minh called Chinese State Councilor Yang Jiechi and told him the deployment of the $1 billion deep sea rig, which he said was accompanied by military vessels, was illegal and a violation of Vietnamese sovereignty.

Beijing says that the rig, CNOOC 981, is in its territorial waters. China claims nearly all of the South China Sea.

“Vietnam cannot accept and resolutely protests this Chinese action. It demands that China withdraw the rig HD981 and escort vessels from this area,” the statement quoted Minh as telling Yang.

Minh said Vietnam wanted to solve all territorial disputes with China peacefully but “will apply all necessary and suitable measures to defend its rights and legitimate interests” in the seas.

Despite Minh’s warning, Vietnam has limited leverage in dealing with its giant neighbor and vital economic partner. It can’t afford damaged ties with Beijing, and has no hope of competing with it militarily. But it also needs to show a strong response to appease domestic critics, who accuse it of being soft on China.

Vietnam’s Foreign Ministry says the rig is within Vietnam’s exclusive economic zone and continental shelf as defined by the 1982 U.N. Convention on the Law of the Sea. China’s maritime administration has announced that ships are prohibited from entering a 3-mile (4.8-kilometer) radius around the area.

The Philippines, a treaty ally of the United States, is challenging China’s claims in the waters in an international tribunal in defiance of Beijing’s wishes that the disputes be negotiated bilaterally. Vietnam and other claimant states have not joined Manila in taking that step.

China is believed to be embarking on a strategy of gradually pressing its territorial claims by taking incremental measures to assert its sovereignty, believing that its smaller neighbors will be unable or unwilling to stop it. Vietnam has accused Chinese ships of cutting cables to its oil exploration vessels and harassing fishermen.

The oil rig is close to the Paracel Islands, which are controlled by China but claimed by Vietnam. China occupied the Paracel islands 40 years ago, and 74 U.S.-backed South Vietnamese forces died in a subsequent military clash. The Vietnamese and Chinese navies clashed again in 1988 in the disputed Spratly Islands, killing 64 Vietnamese sailors.

The United States is not a claimant in any of the territorial disputes in the South China Sea, but says it has an interest in their peaceful resolution. Psaki said the U.S. was looking into situation regarding the oil rig.

“These events point to the need for claimants to clarify their claims in accordance with international law and reach agreement on what kinds of activities should be permissible within disputed areas,” she told reporters.