‘Sextortionists’ in PH blamed for Scot’s death
By: Nikko Dizon and Maricar Cinco - @inquirerdotnet
Inquirer Southern Luzon / 12:21 AM May 04, 2014

MANILA, Philippines—The leaders of the international “sextortion” ring that has victims all over the world have been identified, but Philippine authorities will not disclose their identities just yet as they are still being hunted down.

A multinational police operation busted the syndicate in the Philippines on Wednesday, with 87 people being arrested, including three men identified as the Internet con artists who victimized a Scottish teenager, Daniel Perry, whose suicide last year led to the discovery of the “sextortion” ring.

Chief Supt. Reuben Theodore Sindac, spokesman for the Philippine National Police, told the Inquirer by phone Saturday that authorities on top of the investigation already know who are running the syndicate.

“Many of them have been identified because of the investigation but no details are given at the moment because operations are still [going on]. Authorities are still in pursuit of the many reported cases of this sort,” Sindac said in Filipino.

Sindac said the investigating authorities would not mention any detail, not even the nationalities, of the masterminds.

The Inquirer learned from a well-placed source that it appears no one person has control of all the cybersex cells.

The source said the PNP was “investigating who might be heading each one.”

The source asked for anonymity for lack of authority to discuss the police investigation with journalists.

Asked how the syndicate works, Sindac replied: “As in any business, there’s management.”

“We don’t know if there’s a mother group. Right now, they alone know the depth and breadth of their operations but authorities know that it is wide and far-reaching,” he said.

In Laguna province, a police official told the Inquirer on Saturday that the three Filipinos involved in the blackmail that drove Perry to suicide are just in their 20s, and they used a shared Facebook account to extort money from the 17-year-old Scot.

Perry, a resident of Dunfermline, Fife, in Scotland, committed suicide in July last year. A police investigation into his death led to the discovery of an international cybercrime syndicate that has tentacles in the Philippines.

Simultaneous raids by Philippine and international police agents on the syndicate’s “call centers” in the Bicol region, Laguna and Bulacan provinces and in Metro Manila on Wednesday busted the group’s operation in the Philippines.

Senior Supt. Bernard Yang of the Philippine National Police Anti-Cybercrime Group (PNP-ACG) that led the raids in Laguna and Taguig said Vincent Regori Bravo, Jomar Palacio and Gian Tolin were “the ones responsible” for Perry’s death.

He said the three men at first operated under a “leader,” but broke away to work on their own.

The three men, all in their early 20s, worked from their homes, he said.

“They didn’t get any (money from Perry) because the victim himself was also young,” he said.

Scottish investigators said Perry jumped to his death from the Forth Road Bridge near Edinburgh on July 15, 2013, after being victimized by Internet con artists.

PNP Director General Alan Purisima told a news conference at Camp Crame on Friday that the “sextortionists” record or gather sex videos and nude photographs of unsuspecting victims through social networking sites such as Facebook or extract embarrassing images from cell phones and laptops.

The con artists use the images to “extort sexual favors or money” from the victims, threatening to share the images on Facebook and Twitter if the victims do not pay up, Purisima said.

Perry’s problem started when he met a woman on the website ask.fm a few months before he committed suicide. Scottish investigators said Perry had been tricked into doing sexual acts before his computer, which were recorded by syndicate members without his knowledge.

Scottish police found the exchanges between Perry and the syndicate members, Senior Supt. Gilbert Sosa of the PNP-ACG told the news conference.

Perry was begging the extortionists not to release his [sex] videos because he did not have money, Sosa said. 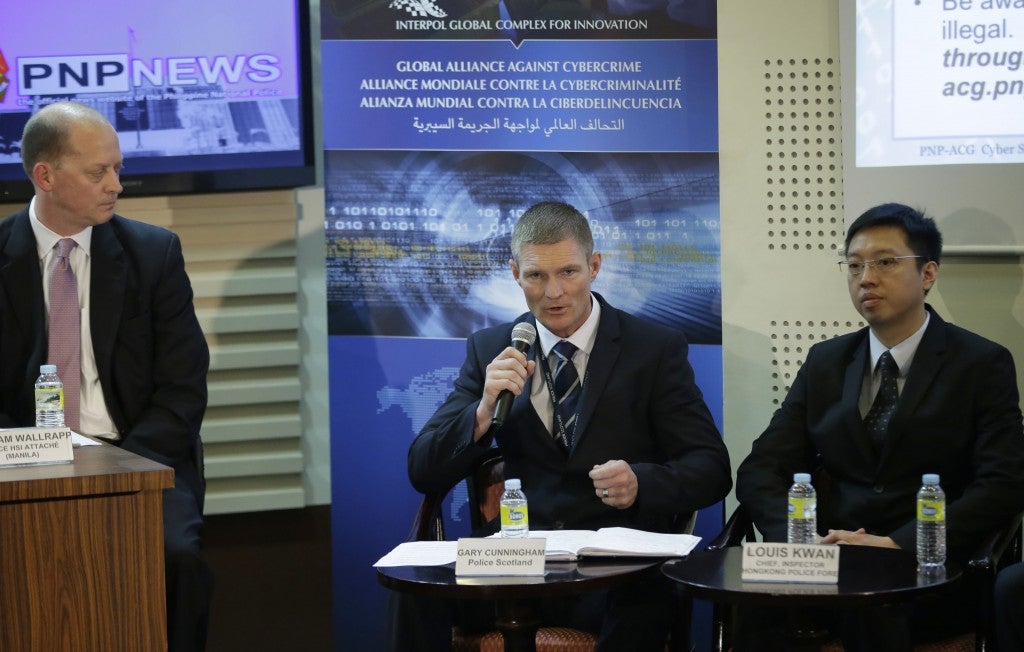 Gary Cunningham, center, of the Scotland Police, addresses the media during a news conference Friday, May 2, 2014 at the Philippine National Police headquarters in Quezon City. Philippine police, backed by Interpol, have arrested dozens of suspected members of an online extortion syndicate who duped hundreds of victims worldwide into exposing themselves in front of webcams or engaging in lewd chats, including a Scottish teenager who committed suicide after being blackmailed, officials said. Listening to him are William Wallrapp of the US Department of Homeland Security Investigations and Hong Kong Police Chief Inspector Louis Kwan. AP

But the syndicate pressed Perry for money and sent him threatening messages, driving him to suicide, Sosa said.

He said Scottish investigators traced the Internet protocol addresses of the syndicate members to the Philippines and sought assistance from the PNP to arrest the extortionists.

Laguna investigators would not say whether Bravo, Palacio and Tolin blackmailed Perry as members of the syndicate or on their own.

The three men were among 87 people arrested by PNP and International Police (Interpol) agents in the raids Wednesday, part of a multinational operation called “Strike Back” involving the US Department of Homeland Security and the UK, Scotland, Hong Kong and Singapore police.

Yang said Bravo was arrested in his home in Biñan City in Laguna, while Palacio and Tolin were arrested in their homes in Taguig City, Metro Manila.

Police seized Bravo’s laptop, which investigators were examining in an effort to trace other victims.

“The laptop looks old,” Yang said, indicating that the three men have been involved in “sextortion” for some time.

In an interview, British Ambassador to the Philippines Asif Ahmad told the Inquirer that Scotland police are now “looking at evidence that links those who have been arrested to the death of Daniel Perry.”

Ahmad said British authorities have had “close support” from the PNP, the National Bureau of Investigation (NBI) and the Department of Justice.

Sindac said those arrested in the raids on Wednesday, all Filipinos, were detained and would be subject to Philippine laws.

Sindac said the provisions of the Cybercrime Law deemed constitutional by the Supreme Court provided the legal basis for the arrest of the suspects.