David Lagman: Facing blank wall … but inside Air Force One 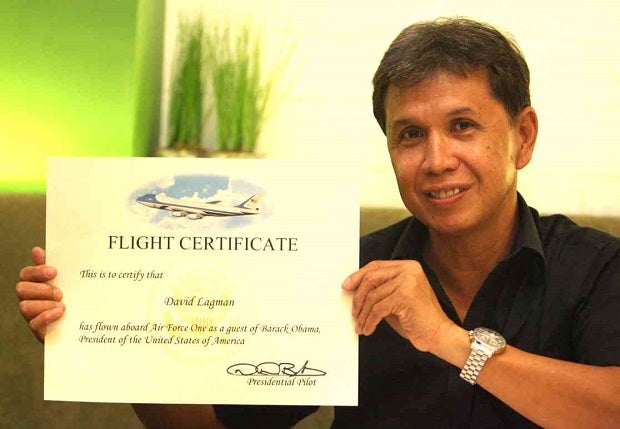 FLYING HIGH The flight certificate says it all for David Lagman, ABC News’ Filipino journalist on board Air Force One, during US President Barack Obama’s four-nation Asian swing. MARIANNE BERMUDEZ

MANILA, Philippines—While Filipino journalists scrambled to take selfies with US President Barack Obama in the background giving a speech or walking behind them during his visit to Manila, two of their colleagues were just a bit luckier.

They got to ride on Air Force One and got close enough to Obama to actually smell him.

“He’s not really elegant but he’s casual and cool. His grip is tight, his strides are sure and he makes it a point to make eye contact, even with us,” Lagman said of Obama.

But the most the US President said to Lagman was, “Hey, how ya doin’?”

A freelancer, Lagman was tapped by the US network ABC to be its cameraman to work in tandem with the network’s Filipino reporter.

Covering heads of state is nothing new to Lagman. In fact, one is a close friend. Lagman, 55, has known President Aquino since they were small boys at Ateneo de Manila University.

Lagman has covered former US Presidents Bill Clinton and George W. Bush, and rode on the press plane with the rest of the White House correspondents, but never had the chance to be these presidents’ close-in media.

Lagman first learned that Obama was coming to Asia from his wife, Tinnie. “I really didn’t know he was coming here,” Lagman confessed.

Lagman immediately phoned his colleagues at the network, who promptly told him that they were going to check Obama’s schedule. Soon enough, Lagman received the all-important e-mails—including the one from the network assigning him to the coverage and those from the White House, which sent him, among other things, SOPs (standard operating procedures) in covering the president.

The White House “highly recommended” that the journalists get vaccinations for ailments like chikungunya, a viral disease transmitted by the bite of the Aedes mosquito.

“I ignored that. Maduming tubig nga kaya kong inumin, eh (I can even drink dirty water),” Lagman said, laughing, recalling the time in 1987, shortly before he and Tinnie got married, when he got stuck in the middle of an encounter between Army Scout Rangers and communist insurgents. Exhausted from running, he dunked his face in a puddle and drank the water.

Two weeks before the trip, the journalists received their accreditations. The moment came when the White House asked who would like to be the close-in media of the president for each leg of his Asian trip: Tokyo-Seoul, Seoul-Kuala Lumpur and Kuala Lumpur-Manila.

It was a pooled coverage where all news agencies would be sharing their photos, videos and interviews. They would differ only in the angles of the stories that they would publish.

“I wondered why we were the only volunteers for the Tokyo-Seoul leg,” Lagman said. Of course, he wanted to get as close to Obama as possible, which was why he wanted to be a close-in media.

Why there were no takers, Lagman found out soon after he started running after Obama to capture every moment in Tokyo while carrying all the heavy equipment on his shoulders.

Obama’s three-day stay in Tokyo was perhaps the most packed throughout the Asian tour, Lagman recalled.

“It was tiring! Imagine how heavy the camera was and on my other shoulder was another 16 kilos of equipment, including the tripod. Then I had to run uphill when Obama visited Meiji Shrine,” Lagman said.

And while the close-in media “was always first at the coverage, we’re also the first ones whisked away by the Secret Service,” Lagman said. Everything was on cue.

“These huge, burly guys would grab me by the back of my shirt and pull me up, while saying ‘Let’s go! Let’s go!’ Eh sana nga binuhat na lang talaga ako para hindi na ako tatakbo (I hope they just carried me so I didn’t have to run),” the lanky Lagman deadpanned.

Physically challenging as the coverage was, nothing beats the experience. For a few days, Lagman was “Camera Crew No. 1” and rode on a Lincoln Continental and Air Force One.

But the close-in media were on the presidential plane for only two hours and they were not allowed to roam inside the aircraft.

“It was just the kitchen behind us, the seats we sat on, the Secret Service in front of us and then a wall. That’s it,” Lagman said.

In the kitchen was White House Filipino-American executive chef Cristeta Comerford from whom he and his fellow Filipino ABC reporter asked napkins with the Air Force One seal to keep as souvenirs.

Lagman, his colleague and Comerford were probably the only Filipinos who got to ride Air Force One throughout Obama’s Asian trip.

Unfortunately, even with Comerford as chef, Lagman had only a salad on his Air Force One ride because it was a mere two-hour flight from Tokyo to Seoul.

“You’ll see them in the skies, then they’re gone. Then you’ll see them again,” Lagman said, still in awe. Talk about traveling with the world’s most powerful man.

Security was tight even inside the aircraft, Lagman said. As they couldn’t walk around, Lagman and his colleague made the most out of taking discreet photos while in their seats, which he described as really, really spacious.

Their photos’ background was so plain, it wouldn’t give one an idea it was on board Air Force One. So the ever-ingenious Filipinos held up a small pillow with an Air Force One logo and took snapshots with it.

Lagman and his fellow reporters who rode on Air Force One were given certificates that said they flew on the presidential aircraft. This he will have to put in a frame and definitely keep for posterity.

Lagman believed that the Secret Service had done a background check on all the journalists who were Obama’s close-in media for the trip, given the stringent security measures to keep the US president safe.

Sleep was a luxury in this Obama coverage, Lagman said, recalling how he dozed off in a chair beside their equipment while waiting for the next activity.

Lagman said that at his age, he was still up for a presidential coverage but not as a close-in media anymore. “I’d gladly do it again if I were 25 or 30. I couldn’t keep up with all those running anymore,” said the father of three grown children.

Lagman was still recuperating from a heart ailment that made him stop working for a few months and required him to take a daily dose of various medicines.

But neither a heart disease nor a head butt from an Abu Sayyaf rebel’s rifle would stop Lagman from doing what he loves the most.

Tinnie had asked her husband to give up journalism several times. Once, Lagman tried a 9-5 office work at a government TV network. A few months into the job, he climbed Mt. Pulag, “felt energized” and returned to the field soon after.

“It’s his love for adventure,” Tinnie said when asked what keeps Lagman going, despite his illness.

An architect by profession, Lagman got his start in the international press shortly before the 1986 snap presidential elections. Tinnie’s sister, who was then working at NBC, told him that the network needed a “gofer” (alteration of “go for” or utusan, Filipino term for helper, as Lagman described the job).

Foreign media had begun to descend in the country to cover the simmering political crisis following the assassination of Sen. Benigno Aquino Jr., his pal’s father.

Lagman had already taught at the University of Santo Tomas (UST) and Assumption College. But already getting serious with Tinnie, Lagman wanted to earn some good money. The job paid $200 a week.

Lagman was hired the same day he submitted his application. The next day, the NBC news team drove to Concepcion town, Tarlac province, to cover atrocities by the military. It was supposed to be just a daylong gig but the producer booked him for another day.

“Everything happened so fast. It was love at first sight with journalism for me,” Lagman said. He never had any formal journalism training and learned the ropes and the tricks of the trade on the job.

It also helped that Lagman was well-liked by colleagues. He describes himself as “Mr. Congeniality.” As a freelancer, his easy nature helped him land a great number of jobs.

In over three decades, Lagman has covered the wars in Iraq and Afghanistan, the 1988 Saffron Revolution in Burma (Myanmar)—where he saw three government spies beheaded by ralliers and their decapitated heads raised in front of his camera—resignations and inaugurations of world leaders, disasters, tragedies and the series of coup d’etats in the Philippines, among others.

In between the bad news, Lagman takes pride in the fact that he has seen John Paul II twice up close. The first was in 1981 when he visited the Philippines and went to UST. Then he was able to cover the late Pope and now Saint John Paul II, at World Youth Day in 1995. John Paul II’s convoy passed along Lacson Street and Lagman recalled that the Pope looked straight at him, waved and smiled.

“It was the most fulfilling moment for me. It’s not even this Obama coverage,” Lagman said. The next day after covering the Pope, Lagman hastily flew to Japan. A massive earthquake had left Kobe in ruins.

Of what’s been happening in the world, Lagman said nothing had really changed. In the business, of course, the equipment had gotten really high-tech.

Lagman spent several months recovering from his heart ailment last year. He took baby steps in returning to the one thing he loved to do the most. He spent a month in Pangasinan province, waiting for the beaching of the whale sharks (he didn’t see any).

Then just before All Saints’ Day, Lagman got a call from journalist Kara Magsanoc-Alikpala, who asked if he was up to covering North Cemetery. “The few hours she told me turned into a whole-day coverage. Lahat yata ng nitso gustong kunan ng cameraman (The cameraman wanted to take pictures of all the tombs),” he laughed.

Soon after, he was taking more jobs here and there. Then Super Typhoon Yolanda happened. Again Alikpala called him up.

They arrived in Tacloban City a few days after Yolanda whipped the province. Lagman wrapped up his coverage on Dec. 23 last year.

Mr. Congeniality is definitely back—with a certificate from Air Force One to prove that he was there.

The night our editor came face-to-face with President Obama