From Vigan to Sweden: Portrait of an author | Global News
Close
menu
search

From Vigan to Sweden: Portrait of an author 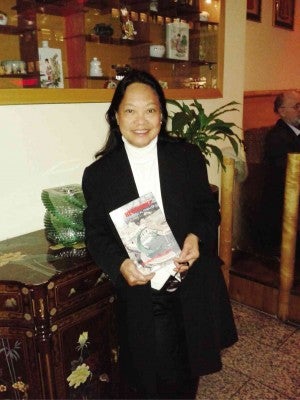 STOCKHOLM—I met Elizabeth Ferido-Bohlin some 24 years ago when we were distant neighbors in Södermalm, a district in central Stockholm. A petite lady with long black hair, she was always smartly dressed in pants and blazers and on sunny days, wore a hat. It was not easy to let someone like her go without a side glance, because she stood out from the crowd, which always seemed to be rushing somewhere. We became friends and got to know more about each other, even as we discovered other new friends among Filipinos living in Sweden.

She lived in Bondegatan (literally, farmers’ street) and me in Götgatan in the heart of Stockholm’s bohemian culture.

Elizabeth came to Sweden in 1972, eleven days before President Ferdinand Marcos declared Martial Law and banned foreign travel. She came with a degree in political science from the University of the Philippines. She had gone on to UP’s law school but in her senior year, she decided to take a break  from the intensity of law studies. She  left for the University of Stockholm after her admission to the International Graduate School for English-Speaking Students.

She hails from Vigan, Ilocos Sur, the second youngest in a family of five. She tells a rather romanticized story about her father, Rosario Antonio Ferido—an only child, who, to the disappointment of her grandfather who wanted him to be a priest, ran away from home and joined the United States army. Young Ferido completed military schooling in America  and after two years returned to his home country. He was assigned to Corregidor where he met Elizabeth’s mother, the daughter of a Filipino officer in the US Army. Her father was wounded in Bataan. He reached the highest rank of lieutenant, claiming discrimination then for being a Pinoy. He rose to the rank of  captain only upon being honorably discharged from the army. But he enjoyed a handsome pension in US dollars. With this bounty, Elizabeth was never deprived of anything, living and studying side-by-side with girls  from rich and powerful families.

Elizabeth fell in love with Sweden, or… with Swedes in the ’70s who had not seen many black-haired immigrants. She remembers people stopping in the streets and stores, touching her hair and wanting to know if it was real: “It is so black that it turns blue under the sunlight.” She felt special and glowed in the midst of admiring Swedish classmates and friends. She was invited to dinners by Swedish families and even attend the Nobel Festivities. A small  homogenous society that has not been at war in the last 300 years, Sweden built a welfare state grounded on equality and democracy, hence, the Swedish Model… subject of learning for the entire world.

Elizabeth finished the one-year international and global studies diplomacy course, got a scholarship to continue to a master’s degree in political science, then applied and was accepted for the PhD program in international politics. She could not resist a job offered to her by the Ambassador of Saudi Arabia in Stockholm, himself a Harvard PhD graduate. But after many years there, she resigned to take up a similar job at the South Korean embassy in Sweden. 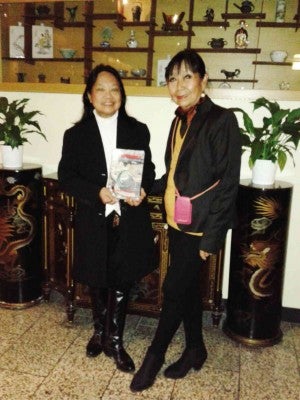 In September 2009, after terminating her employment at the embassy of the Republic of Korea, she left for Oxford University.  “A homecoming for me,” she said. “I spent a long time in Oxford as a young student in the ’70s doing research for my master’s degree with that one haunting wish even then: One day to return and write a novel, not an academic essay.”

And so, it came to pass: A political thriller fills 426 pages of the novel “Hegemony.” It  depicts the reality of contemporary Swedish society, expanding wider to the European continent. For me, a new persona from the Elizabeth I knew seemed to have come forth. She had not discussed much of her book ideas with her closest friends, even with me. Suddenly in the autumn of 2009, she just told everyone that she was going to Oxford University to write her book. She came back to Stockholm on June 2010 and worked feverishly on her chapters. Her main setting is her own condominium—The Valfisken—located in the well-off district of Östermalm in Stockholm. Her plot revolves around a contemporary sociopolitical issue: the growing Islamization of Sweden and

Writing her book took all her commitment to finish it. I was closest to every chapter she wrote, each time putting breaks on some parts that got unwieldy. She finished her manuscript triumphantly after several revisions and consultations with me. Then came the next step of publishing it. She returned to Oxford to meet people and get advice. One professor-friend of hers introduced her to Xlibris publishing company, a self-publishing, print-on-demand venture.  I advised her to go ahead, after much consideration on the terms and conditions of the

Her book  was published and released in November 2013. When she finally received her advanced copies and saw the reality of her long hours of toil, one could almost feel the emotional swells in the debutante author’s heart. We had a private launching of her book in our favorite restaurant “Chopstick.” Along with her UP and IGS contemporary, Mary Borromeo-Hedfors, she signed her first copy and handed it over to me. It was an intimate moment, a reaffirmation of our friendship.

She still has not told me what inspired her to write this political thriller. She said: “Look around you!”  and to this, I quipped: “What I see from my window is different, which ultimately brings us to the conclusion that every window gives a different view of the world.”

Among her closest circle of friends, both old and new, no one imagined Elizabeth writing a book in this genre, picking up a cause with such fervor only known to the pronationalist, anti-imperialist voices of the ’60s. Is it the calling she has  guarded so well in her heart since childhood: to tell and write a story? She has always had strong opinions about certain social and political issues, but it was something she previously expressed only among her circle of friends.

As a friend, Elizabeth’s loyalty and generosity is unquestionable. She loves her Östermalm flat—tastefully (and luxuriously, we joke) furnished with antiques that she has acquired through years of visiting shops and bidding at auctions at Bukowskis. She loves to entertain at home and is equally happy to share her wine collection with chosen guests.

Does she plan to write a sequel? “Hegemony” ended with a suspenseful episode hanging in the air. She said, she will write Part II that will reveal the prowess of that worthy hegemon  in dealing with the danger of our time: the obliteration of that which has bequeathed the highest universal values to mankind—democracy, rule of law, human rights and equality. This issue is now being wrestled with in the corridors of power in Brussels as political leaders tackle multiple problems of border enlargement and the spectacle of two old nemesis: Islam and Christianity, in a continuing eye-to-eye battle for supremacy. Will diplomacy with compassion eventually prevail?

Elizabeth’s world has gone a long way since she left Vigan and the student dorms in the UP-Diliman and Stockholm University. She has settled to her heart’s content in her beloved Valfisken (The Whale) in Östermalm, a world she envisions peopled with aristocrats and achievers in various spheres of the sociopolitical landscape of Sweden.