MANILA, Philippines—The suicide of 17-year-old British mechanic Daniel Perry in July last year led police to an international cybercrime syndicate based in the Philippines, and the eventual arrest of 58 people  allegedly involved in “sextortion,” the Philippine National Police said on Friday.

“The Police Scotland investigators conducted a digital forensic examination of Perry’s computers and found that he had been a victim of extortionists,” said Senior Supt. Gilbert Sosa of the PNP Anti-Cybercrime Group (ACG).

“They were able to trace the IP (Internet Protocol) addresses of the online accounts of the syndicate members to the Philippines,” he added.

The multination operation, dubbed “Strike Back,” was carried out with the assistance of the US Homeland Security and the police authorities of the United Kingdom, Scotland, Hong Kong and Singapore.

In simultaneous raids on Wednesday, agents of the PNP and the International Police (Interpol) swooped down on the syndicate’s “call centers” located in the Bicol region, Laguna and Bulacan provinces and Taguig City, arrested 58 people, and seized more than 250

‘To identify other victims’

The operations in Laguna and Taguig led by Senior Supt. Bernard Yang and other Interpol agents netted men who were allegedly responsible for “sextortion” activities among victims in the United Kingdom, according to PNP Director General Alan Purisima.

Sosa said the seized digital evidence “will be analyzed by the forensic team of the PNP-ACG with the help of experts from other countries to identify any additional victims and for follow-up investigations.”

In a news briefing at Camp Crame, Purisima said the operation “provided the opportunity for information-sharing and continuous collaboration, cooperation and coordination among our international and local partners in cracking down on cybercrime around the globe.”

Sosa said the illegal operations of the syndicate were uncovered after investigators of Police Scotland sought the PNP’s assistance in looking into the suicide of British teenager Perry.

Perry, a resident of Dunfermline, Fife, in Scotland, jumped to his death from the Forth Road Bridge near Edinburgh on July 15, 2013, after being victimized by Internet con artists.

“The investigators saw the exchanges between the victim and the syndicate members. Perry was begging the extortionists not to release his [sex] videos because he did not have money. But the syndicate kept demanding money from him,” Sosa said.

Perry’s problem started when he met a woman on the website ask.fm with whom he engaged in online chat conversations a few months before he committed suicide.

Believing his chat mate was a woman, Perry was tricked into doing sexual acts before his computer, which were recorded by the syndicate members without his knowledge. 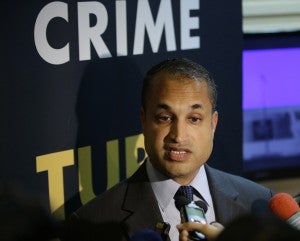 INTERPOL Digital Crime Centre Director Sanjay Virmani, is interviewed by reporters following a news conference Friday, May 2, 2014 at the Philippine National Police Headquarters at suburban Quezon city northeast of Manila, Philippines. Philippine police, backed by Interpol, have arrested dozens of suspected members of an online extortion syndicate who duped hundreds of victims worldwide into exposing themselves in front of webcams or engaging in lewd chats, including a Scottish teenager who committed suicide after being blackmailed, officials said. AP

“The sextortionists then started to blackmail Perry,” Sosa said.

“They warned that they would upload his embarrassing videos on the Internet if he did not give them money,” he added.

The scammers also sent threatening messages to the victim. One such message read: “You need to let a blade meet your throat.”

Another said: “Kill yourself, mate.”

The PNP chief said syndicates involved in “sextortion” record or gather sex videos and nude photographs of unsuspecting victims through social networking sites such as Facebook, or extract incriminating images from mobile phones and laptop computers.

Purisima said the videos and images were then used by syndicates to “extort sexual favors or money from the victim with the threat of sharing these [images] with others” on Facebook and Twitter if the victim refuses to give in to their demands.

“Be cautious about the people you meet online. Revealing personal details online is extremely risky … because there are a lot of fake accounts online,” the PNP official warned, adding that images of attractive young women are often used to lure victims into engaging in online chats.

Police said the sextortion syndicates had collected millions of pesos from hundreds of victims based in Australia, Singapore, Hong Kong, United States and United Kingdom in the last three to four years, most of whom pay between $500 and $2,000, through Western Union and other money transfer or remittance companies.

The 58 people arrested would be charged with several crimes, including engaging in child pornography, extortion and using technology to commit fraud, Purisima said.

It was not immediately clear whether all 58 arrested were Filipinos, and authorities emphasized that the Philippines was not the hub of the global sextortion network, only that the current investigation had focused on the country.

Purisima said some of the sextortion groups operated like call centers where the operator hires men and women, sitting in rows of computer cubicles, to lure in foreign clients.

“The scale of this extortion network is massive,” the director of Interpol’s Digital Crime Center, Sanjay Virmani, said, adding that his group had been closely working with officials of the Interpol’s 190 member-countries, warning that the operation of sextortionists “is a growing threat.”

British Ambassador Asif Ahmad said online scammers and other cybercrime operators had been victimizing unsuspecting Internet users all over the world. “This is not an issue directly involving the Philippines exclusively. It respects no nationality or border,” he added.

Easy access to the Internet, a relatively lower risk of arrest and big financial gains have caused such crimes to flourish in recent years in countries such as the Philippines.

Hong Kong police Insp. Louis Kwan Chung-yin said more than 470 people from Hong Kong were victimized last year and about 160 so far this year.  A US Embassy official said American military personnel were among the victims in the United States.

Kwan said Hong Kong victims had paid up to $15,000 in desperate attempts to keep the sexually compromising material private. But once hooked, the victims sometimes found they could not escape.

Kwan said some victims paid up to three times before going to the police, “when they realized they could no longer afford to continue paying.”

Three of the arrested Filipino suspects were believed to have victimized Perry, who took his own life after reportedly being warned that his video conversations would be circulated to his friends and family if he didn’t pay up.

Gary Cunningham, a police officer from Scotland, said criminal complaints would be filed against the three Filipinos if there was enough evidence to connect them to the blackmail.

“You cannot imagine the impact this has had for Perry’s family,” Cunningham said. “They’re still trying to cope with the circumstances.”

Warning those still engaged in cyberextortion in the Philippines and elsewhere in the world, Virmani said: “You better be prepared for the consequences of your actions because as you can see we have made a commitment to work together. You will be caught and you will be held accountable for your actions.”—With reports from wires