Philippines to offer up to five bases for US troops 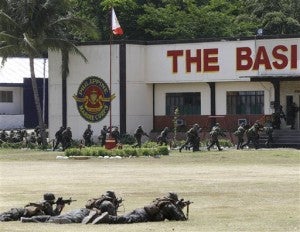 MANILA, Philippines– The Armed Forces of the Philippines said Friday it plans to give the United States access to three to five of its bases under a deal that could see US forces return to their former facility at Subic Bay.

“It will not be the whole universe of the  bases,” said Defense Undersecretary Pio Lorenzo Batino, chairman of the Philippine Negotiating Panel on Friday. “Right now the discussions would be ranging from three to five AFP bases. That’s not the final but that is the starting discussion point.”

The Enhanced Defense Cooperation Agreement (Edca) signed last week would allow the US to rotate more aircraft, ships, equipment and troops over the next 10 years at unspecified bases in the Philippines.

Batino said the two countries are now in follow-up talks to select the bases.

The camp is the largest in the Philippines, and it houses the Army’s 7th Infantry Division and the Special Operations Command.

Batino described it as “an ideal location,” but said it is still for recommendation and subject to approval.

He said the AFP is also in talks with the Subic Bay Metropolitan Authority to use “limited portions” of Subic so it can strategically locate Philippine Air Force and Navy equipment.

Batino declined to identify the other military camps being considered, saying that discussions were ongoing.

The Philippines has about 50 military bases.

Batino said that Manila intends to conclude the discussions not later than September 30.

The deal for increased US access is part of Philippine efforts to boost its weak military capabilities at a time of deep tensions with China over competing claims to parts of the South China Sea.

China claims most of the sea, even waters close to the Philippines and other countries in the region.

Subic, facing the South China Sea, was the former repair yard of the Japan-based US Pacific fleet.

American forces vacated it in 1992, along with nearby Clark Air Base, after the Philippine Senate refused to extend a bases treaty, ending nearly a century of major US military presence.

It is now a civilian free port, but maintains a US-era military runway and a deep harbor that is still used by American warships stopping over for military exercises or for regular provisioning.

Bound by a mutual defense pact, the US and the Philippines engage in regular war games that see thousands of US troops and state-of-the-art American military hardware brought to the Philippines.

The Philippines signed the bases access deal last week, hours ahead of a state visit to Manila by American President Barack Obama.

The deal also allows the US to build structures inside the bases for use by its forces, as well as to store supplies and equipment.

Not quite a base, but US has full access to AFP camps