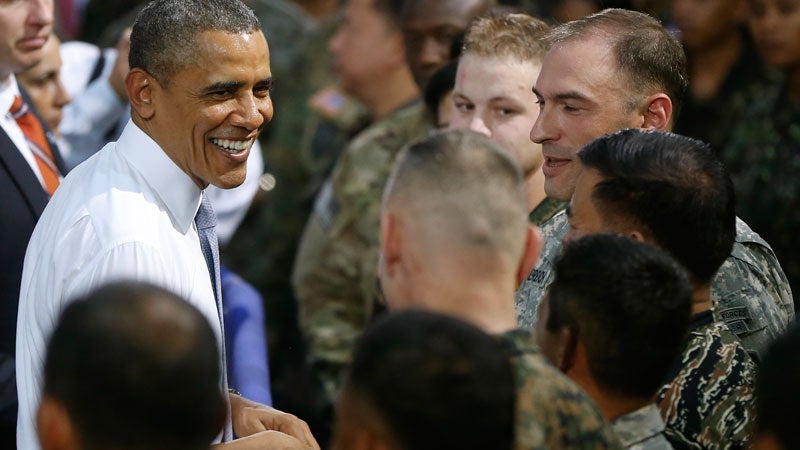 President Barack Obama speaks to US and Philippine troops at Fort Bonifacio in Manila on Tuesday, April 29, 2014. He gave special mention to four military officers, including a Filipino from the Naval Special Operations Group, as the main characters in “an incredible story that captures the strength” of the longstanding alliance of the Philippines and the United States. AP PHOTO/CHARLES DHARAPAK

MANILA, Philippines—Four military officers, including a Filipino from the Naval Special Operations Group (Navsog), were given special mention by US President Barack Obama on Tuesday as the main characters in “an incredible story that captures the strength” of the longstanding alliance of the Philippines and the United States.

Navsog Capt. Roy Trinidad, US Col. Mike Wylie and US Majors Leo Liebreich and George Apalisok were the first responders in Tacloban City, one of the areas devastated by Super Typhoon Yolanda (international name: Haiyan) on Nov. 8, 2013.

The burly Trinidad caught Obama’s attention and was the reason for a few laughs with the US president as the latter mingled with the four honorees.

“I told him (Obama), ‘Your guys helped me a lot.’ But he answered, ‘No, no, no. You trained them,’” Trinidad told the Inquirer in an interview.

Then Liebreich told the US president, “He (Trinidad) whipped us into shape.”

To which Obama replied, “Yeah, look at his (Trinidad’s) chest and look at his guns,” referring to the officer’s biceps, which he playfully slapped.

“I didn’t feel nervous …. I was more concerned that I represent the whole AFP (Armed Forces of the Philippines) at the event. There is pride,” said Trinidad, whose rank is equivalent to a full colonel in the Army and is a member of Philippine Military Academy Class 1991.

“But it could have been anyone else. There are many others doing more difficult jobs, the unsung heroes,” he said.

It was a thought shared by Apalisok and Liebreich, who met their commander in chief in person for the first time on Tuesday.

They said that while their names were mentioned by Obama in his speech at the Army Gym in Fort Bonifacio in Taguig City, the work the Philippine and US militaries did in Tacloban and other storm-ravaged parts of the country was all teamwork.

“I felt very honored but I also felt there were a lot of people involved and … we were supported by many hundreds of people. This represents recognition for all their efforts then that makes us happy. The personal pride in hearing my name read is small compared with the [fact the] organization is recognized and [also] our partnership,” Liebreich said.

For their efforts, they were “coined” by Obama, a term used in the military when a commander gives his subordinates his personal coin in recognition for a job well done.

“We all know about the massive international response after Yolanda. What few people realize is that it all started with a single aircraft carrying a handful of Filipino and American troops and civilians,” Obama told some 200 Filipino and US soldiers at the Army Gym.

Obama was referring to the first Philippine Air Force C-130 that landed in Tacloban, with Trinidad, Wylie and Apalisok. The next day, Liebreich followed.

Trinidad, who is assigned to the operations office of the AFP, volunteered to be part of the first team that was sent to Tacloban the day after the storm ravaged most parts of the Visayas.

The officer from Navsog (formerly Navy SEALS) became the overall operations commander of the devastated Tacloban airport, the only functioning gateway to the flattened city.

Wylie, Apalisok and Leibreich all went as members of JUSMAG (Joint US Military Assistance Group), tasked with assessing the situation and briefing the US military on how it could help the storm survivors.

Obama recalled how the Filipino and US soldiers worked together—from setting up a medical station to reopening the airport.

“Filipino soldiers unloading aid from American cargo aircraft; American troops loading supplies onto Filipino helicopters. And when all the cargo was off those aircraft, our troops worked together to help local residents aboard so that they could be evacuated to safety.

And over and over, those grateful Filipinos responded with a simple word—salamat (Thank You),” Obama said.

Apalisok said he learned to be patient throughout his deployment in Tacloban where he had to work with the barest minimum that forced him to adapt to the different changing situations.

“You have certain guidelines you follow. But in the fog of war as they say and everything is topsy-turvy, there is chaos, there is no order, so we have to adapt. We had to be flexible and be patient,” Apalisok said.

Obama, who apologized for not wearing his suit because of the intense heat, compared the cooperation of the US and Filipino soldiers with that of the war veterans.

“The spirit of these veterans — their strength, their solidarity — I see it in you as well when you train and exercise together to stay ready for the future, when our special forces — some of you here today — advise and assist our Filipino partners in their fight against terrorism, and when you respond to crises together, as you did after Yolanda,” Obama said.

“Along with your civilian partners, you rushed into the disaster zone, pulled people from the rubble, delivered food and medicine.  You showed what friends can do when we take care of each other,” the US President added.