Cinephiles from all over the world on May 1 to 11 will also get the chance to see the best of Asian Pacific American and Asian films at the 30th LAAPFF hosted by Visual Communications, the premier media arts center that first launched the film festival three decades ago.

The film festival has grown to international fame having featured over 140 films from more than 20 countries.

These five movies were featured in the Cinemalaya Film Festival and Cinema One Originals Festival, two of the most popular independent film festivals in the Philippines.

The 21-year-old Red, son of pioneering Philippine independent director Raymond Red, wrote and directed “Rekorder,” a story about video piracy set in the street of Metro Manila. He will be introducing his movie at the screening along with producer Pamela Reyes and actor Ronnie Quizon.

“Kabisera”  follows the story of a fisherman, portrayed by the director’s uncle, actor Joel Torre, who gets caught in the middle of a meth trade. The cast includes Bernard Palana, Art Acuna, Meryll Soriano, and Carlo Cruz. If you enjoyed shows like “Breaking Bad” and “The Wire,” this film is for you. 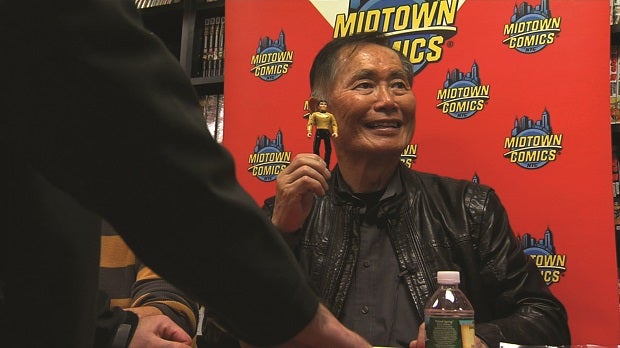 “Trekkie” George Takei in “To Be Takei” CONTRIBUTED PHOTOS

“Blue Bustamante” is a nostalgic movie for ‘90s kids who grew up watching the Sentai TV shows, even before the dawn of its Americanized cousins, the “Power Rangers.” When an Overseas Filipino Worker (OFW) is laid off, he lands the part as a double for the Blue Ranger in a Japanese TV show. Comedy and drama ensue in the film starring Joem Bascon and Jun Sabayton.

“Shift”, directed by Siege Ledesma, is a dramedy about two call center agents who try to keep their friendship alive despite their unrequited feelings for each other. OPM Singer Yeng Constantino and Felix Roco, son of veteran Filipino actor Bembol Roco, star in this indie flick that bring nuance to gay and lesbian relationships in the Philippines.

“Debosyon” is a story about a farmer who is a devotee to the Virgin of Penafrancia, a figure of the Blessed Mother Mary worshipped in the province of Bicol. After falling unconscious in the middle of the forest, he meets a mysterious lady who lives in the forest. A love story that is full of mystery, the film tackles how one man’s faith can be put to the test.

Other films in the festival include the 2014 Sundance Film Festival hit “To Be Takei,” a documentary on actor, activist, artist, and famous “Trekkie” George Takei, who recalls his days from being on “Star Trek” to being an active voice for civil right and marriage equality.

Actress Michelle Yeoh will be featured in a culinary/romantic drama called “Final Recipe,” a story about a young chef who is determined to save his ailing grandmother’s restaurant by joining a culinary show in which Yeoh stars as the producer.