MANILA, Philippines – After giving a statement the day before that sounded more of an assurance of peace to China than of support to the Philippines, US President Barack Obama on Tuesday reiterated that it fully backs the Philippines if attacked by another country.

“Our commitment to defend the Philippines is ironclad,” he said in a speech in Fort Bonifacio, Taguig City.

The visiting President, addressing Filipino and American war veterans and soldiers, pointed out that the two countries have been bound by a Mutual Defense Treaty for more than 60 years.

“This treaty means our two nations pledge, and I’m quoting, our ‘common determination to defend themselves against external armed attack, so that no potential aggressor could be under the illusion that either of them stands alone,’” he explained.

Before saying that, however, Obama reminded the people that they believe that disputes should be resolved peacefully and not by intimidation or force. 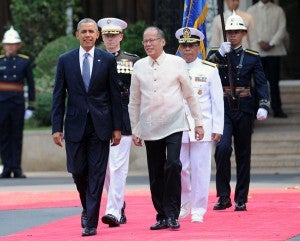 US President Barack Obama ( front, L) along with Philippine President Benigno Aquino walk prior to inspecting the honour guard during a welcoming ceremeony at the Malacanang Palace grounds in Manila on April 28, 2014. President Barack Obama landed in the Philippines April 28 to cement new defence ties on the last leg of an Asian tour conducted against a backdrop of territorial tensions between US allies and China. AFP

“Deepening our alliance as part of our broader vision for the Asia Pacific, we believe that nations and people have the right to live in security and peace and have sovereignty and territorial integrity respected,” he said. “We believe that international law must be upheld, the freedom of navigation must be preserved and commerce must not be impeded.”

He said this a day after the Enhanced Defense Cooperation Agreement (EDCA) was signed by Defense Secretary Voltaire Gazmin and US ambassador to the Philippines Philip Goldberg.

“Yesterday, President Aquino and I agreed to begin a new chapter in our alliance.  And under our new agreement, American forces can begin rotating through Filipino airfields and ports.  We’ll train and exercise together more to bring our militaries even closer, and to support your efforts to strengthen your armed forces,” Obama said.

Obama’s state visit to the Philippines is the last leg of his Asian tour, following his stopover in Japan, South Korea and Malaysia. It is part of the US campaign to re-balance its forces in the region amid China’s increasing political and military strength.

During the trip, he claimed that US has no plans to counter China or contain it.

In addition to being a supposed threat to the United States, China is also at odds with its Asian neighbors, including the Philippines, over territorial disputes in the South China Sea.