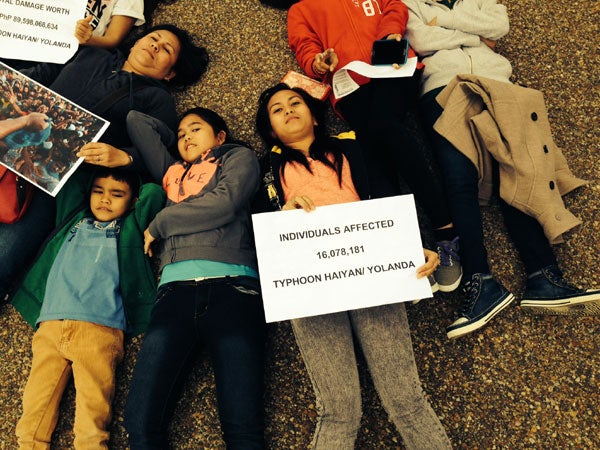 • Transition in Homeland Security leadership may be causing delay

NEW YORK, New York — Filipino American advocates of the Temporary Protected Status (TPS) are optimistic that a decision from U.S. officials in Washington will be made as early as this week, while Pres. Barack Obama is visiting the Philippines.

“They [Department of State and Homeland Security officials] assured us that they would make a decision soon. This week or next week is a possibility,” said Aquilina Versoza, executive director of the Los Angeles-based Filipino Workers Center.

“We’ve made a distinct action in Washington, and we will continue our discussion with them to make it happen,” she added.

If granted, TPS would allow undocumented Filipinos as well as those holding a temporary visa to work and live legally for a finite period of time in the United States. An estimated 300,000 Filipino immigrants with no legal status would benefit from TPS. 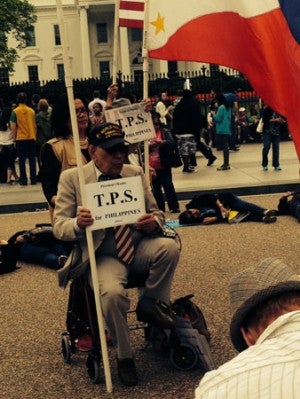 Filipinos demonstrate for Temporary Protected Status in front of the White House, April 25.

Since Pres. Benigno Aquino III agreed on a new 10-year defense pact, or known as the Enhanced Defense Cooperation Agreement (EDCA), which will allow increased presence of U.S. troops in the Philippines, many Filipinos think that there must be a quid quo pro situation, something that works for both countries fairly.

The U.S.-Philippines deal on EDCA came eight days prior to Obama’s arrival in Manila, on Monday, the last stop on his four-country Asian tour. The agreement will provide American forces temporary access to Philippine military bases and allow them to position planes and ships there.

Last Friday, April 25, a few days before Pres. Obama’s arrival in Manila, a coalition of Filipino Americans held a peaceful demonstration in front of the White House to intensify the pressure on U.S. officials.

For about an hour, they carried banners and photos of the massive destruction of Typhoon Haiyan in Tacloban City, and stood a moment of silence to remember the victims.

“We always support the U.S. government in any way,” said Marilou Cajayon, 52, a nanny who has been sending $700 each month to her family members affected by the typhoon near Tacloban City. “They [U.S. government officials] must also do something for us by approving the TPS for Filipinos.”

Critics of TPS, however, say that because Filipinos is the second largest Asian group in the United States, the approval may create more backlogs in immigration agencies, affecting applications not only from Filipinos, but also other immigrants from different countries.

Some even believe that, this is the main reason that the Department of Homeland Security is apprehensive to grant TPS to Filipino immigrants despite the strong support from President Obama and Department State Secretary John Kerry.

“In our specific meeting with the deputy secretary of the Department of Homeland Security [Alejandro Mayorkas], we were assured that the number of Filipinos that would qualify for TPS is not really a concern,” added Versoza. “It is something that the Homeland Department can in fact handle.”

If there is any reason for the delay, she said, it’s that the Philippine government did not make the request immediately after Typhoon Haiyan struck the Philippines on Nov. 8 last year. The new appointment of U.S. Homeland Secretary Jeh Johnson, she says, could also be a factor.

“The Department of Homeland Security has been going through a transition. So, we think that the State Department and the USCIS [U.S. Citizenship and Immigration Services] — it took a process for them to put the recommendations together,” Versoza said. “They just want to make sure the Philippines fit in the statute, and that’s where they are making a decision on TPS.”

According to the USCIS website, “the Secretary of Homeland Security may designate a foreign country for TPS due to conditions in the country that temporarily prevent the country’s nationals from returning safely, or in certain circumstances, where the country is unable to handle the return of its nationals adequately.

“USCIS may grant TPS to eligible nationals of certain countries (or parts of countries), who are already in the United States.”

If the Philippines will be afforded the TPS, the application must be done within the next 16 months after its approval. Although the Homeland Security will specify the eligibility requirements, the ones likely to be covered are immigrants who have been continuously present in the United States prior to the occurrence of a natural disaster.

This means that Filipino immigrants who may be eligible are the ones who have been physically in the United States on or before Nov. 8, 2013 –- the day Typhoon Haiyan devastated parts of the Visayas.

Can Filipinos granted protected status go back to the Philippines? The short answer, according to Versoza, is that the travel benefit is on a case-to-case basis, depending on the immigration situation of the individual.

“We are escalating the pressure and seek support from Filipino leaders both in the Philippines and the U.S. This is one of the strongest campaigns that has been done by Filipinos with Washington officials,” Versoza said. “If TPS won’t be granted, we are going to re-assess and keep putting pressure.”