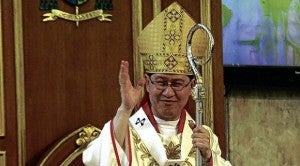 “The Church must lead in viewing migrants and refugees beyond numbers and beyond categorization, towards a recovery of the full human dimension of their condition,” said Tagle, according to an article posted on the Catholic Bishops Conference of the Philippines (CBCP) website.

Tagle’s statement was part of his address delivered to the Filipino-American community at Fordham University in New York last week.

Fordham conferred on Tagle the degree of Doctor of Humane Letters, honoris causa, for “combining strong convictions with a moderate tone and an emphasis on dialogue rather than pronouncements” and “for his moral leadership, advocacy for the poor, and his many efforts on behalf of the Catholic Church.”

Tagle, who is a member of the Vatican’s Pontifical Council for the Pastoral Care of Migrants and Itinerants, discussed the problem of forced migration caused by the different conflicts, hazards and disasters in various parts of the globe.

According to him, there were 72 million forced migrants worldwide in 2012, 3.5 million of whom were stateless.

Citing data from the International Organization for Migration, Tagle said the Philippines alone deployed a total of 1,802,031 overseas workers in 2012, a sharp increase from 1975 when only 36,035 Filipinos left the country to work abroad.

Tagle did not distinguish “forced migrants” from voluntary overseas workers and those who migrate to join family members abroad.

“I thought I would risk boring you by giving you the data. It is staggering,” the cardinal said. “We’re talking of millions of (forcibly) displaced people. The figures cited are not just numbers. They are human beings with faces, lives, stories, destinies.”

“While addressing the causes of forced migration is necessary, we need a fresh perspective on the protection of forced migrants by looking at the human consequences, along with its social costs [and] the wounds it inflicts on displaced families,” he said.

Understanding the plight of forced migrants may be done by “assessing the perils and risks that drove them away from home, as well as the consequences that they faced during their flight from those risks.”

“The migrant, especially the forced migrant, is a traveler, a person on a journey—tired, thirsty, weary, fearful,” Tagle said. “We can help transform their human story from that of a horror story… into one of warm welcome, genuine caring and the experience of belonging.”

Your subscription could not be saved. Please try again.
Your subscription has been successful.
Read Next
Mission possible to Ayungin Shoal: Get around China to revisit ‘LT 57’
EDITORS' PICK
Philippine-United States alliance ‘rock solid’ — DFA
Makabayan bloc blasts bid to expand US access to more military bases in PH
Omega Speedmaster super racing: Tiny device massive change
Fuel price rollback expected on Feb 7
vivo Philippines offers a free bouquet of flowers and a premium necklace perfect for Valentine’s Day
House energy committee chair Arroyo bats for cheap electricity
MOST READ
Vice Ganda gets called out for ‘unfair treatment’ of ‘It’s Showtime’ co-host Karylle
Fuel price rollback expected on Feb 7
Kris Aquino gets ‘renewed confidence’ after consultation with new doctor: ‘I have a strong chance of getting better’
Pentagon tracking Chinese spy balloon over US
Don't miss out on the latest news and information.