JEDDAH–A British national living in this city “working for a large international company” sent INQUIRER.net US Bureau photos of the Filipino refugee camp that “established itself next to the Philippine Embassy.” 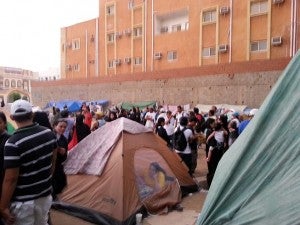 Filipino refugee camp next to the Philippine embassy in Jeddah

“I would like to raise your attention to a humanitarian crisis that is now happening here in the Kingdom,” writes the British national. He counts around 1,500 Filipino men women and children the youngest of whom is three weeks old.

“These refugees, of which most have suffered abuse in one form or another–sexual, physical, non-release or non-payment of salary.”

Saudi authorities announced a crackdown on “irregular immigrants” in the recent weeks, but there are also reports that the Saudi king had asked them to postpone the drive.

The British national further reports that “unfortunately, as these refugees are now classed as illegal,” there is no practical aid available to them and they are now in desperate need of food water and medicine. 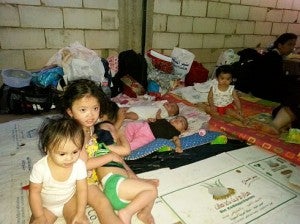 Refugees include women and children (the youngest is three weeks old)

“At ground level there are a few of us trying to help with basic needs, but as I’m sure you are aware even our actions are observed by the state!” he warns, “What is needed is international awareness and pressures on the Philippine government take action.”

This crisis will only get bigger, he writes, due to the fact that Saudi government has now declared that they wish to expel three million persons over the next few years.