‘Gov’t must act on climate’ 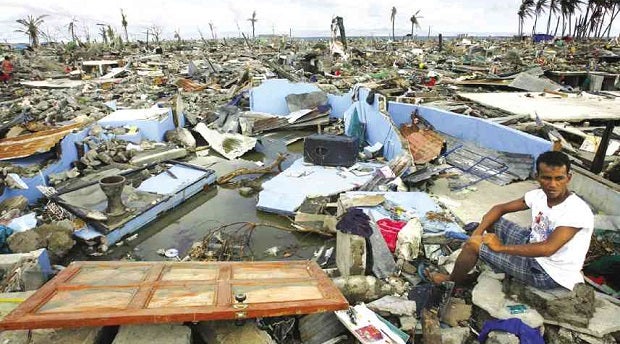 ‘YOLANDA’ SURVIVOR Melvin Castro sits in the rubble of his home in Tacloban City where 18 of his family members were killed. INQUIRER FILE PHOTO/RAFFY LERMA

MANILA, Philippines—The “grim climate forecast for Southeast Asia” made by a recent United Nations report on climate change should prod the government to improve its adaptation and mitigation efforts in the face of calamities like Supertyphoon “Yolanda,” according to three civil society groups.

The groups said the Aquino administration must heed the dire warnings contained in the Intergovernmental Panel on Climate Change (IPCC) Working Group II Report on Impacts, Vulnerability and Adaptation, which analyzed future risks from the changing climate, among other things.

At a press conference on Friday, Aksyon Klima Pilipinas, Greenpeace and Oxfam expressed grave concerns about the scenarios presented in the report and proposed ways the government could respond.

The three groups urged the administration to take the first step by allocating money for the People’s Survival Fund (PSF), which by law should finance the adaptation plans of local government units.

Adaptation plans include setting up early warning systems and contingencies for extreme weather events like droughts and floods, the groups said.

The organizations also renewed their call on governments across the world, particularly of developed countries, to “honor their responsibility and commit to scale up their adaptation and mitigation actions.”

“But after Yolanda, we also need to adapt to the best of our own abilities and empower communities so they can be more climate resilient,” the groups said.

“Beyond the PSF, both disaster risk reduction and climate change adaptation should already be incorporated in the post-Yolanda rehabilitation plan, and then into longer term national and local development plans and budgets,” said Melvin Purzuelo, convenor of Aksyon Klima Pilipinas.

“The IPCC report states that adaptation is not enough. We therefore need to integrate adaptation with mitigation strategies, such as transitioning to renewable energy systems,” said Amalie Obusan, regional climate and energy campaigner of Greenpeace Southeast Asia.

On the PSF, Oxfam country director Justin Morgan said, “Congress must allocate at least P1 billion for the People’s Survival Fund as mandated by law. President Aquino must also sign the revised Implementing Rules and Regulations of the Climate Change Act to make the fund operational.”

“As a highly vulnerable country, extreme weather events are now our new normal and we need to take concrete measures to literally survive,” the three groups said.

The IPCC is the international body for assessing the science related to climate change.

The IPCC Working Group II’s contribution to the Fifth Assessment Report (AR5), issued on March 31 and titled “Climate Change 2014: Impacts, Adaptation and Vulnerability,” details the impact of climate change to date, the future risks from a changing climate, and the opportunities for effective action to reduce risks. DJ Yap