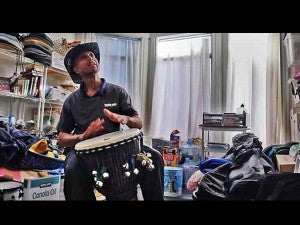 SAN FRANCISCO, California—Benito Santiago, 63, stands in the kitchen of his third floor walk-up apartment on the fringe of San Francisco’s South of Market district, pointing at faded photographs, tourist-spot magnets and souvenir programs of dance parties; his life’s memorabilia on display on his refrigerator door.

In one of the photos, a youthful, carefree version of Santiago smiles.

Frail but still young-looking, Santiago chose to live the life of a struggling artist. He never married or had children. “I didn’t have enough money in a bank account,” he said, eyes downcast as he recalls lost loves. “And the ladies, they saw through that.”

Santiago, a first-generation Filipino American, is a ballroom-dancing instructor, a drummer and a music instructor for special-needs children. He has held many odd jobs through the years, hustling for gigs that came and went, and making just enough to cover the monthly rent of $573.40 and buy food. The one constant he’s had in his life for the last 37 years is his one-bedroom apartment.

“I thought I was going to just live here and retire here, take time to catch up on reading, listen to albums,” Santiago said.

Around Thanksgiving last year, he came home to a notice posted on his door. The new owners of his building were evicting him, and offered to buy him out for $20,000.

“If I didn’t take the offer in that first week, then all bets were off,” he said, summarizing the eviction notice. In panic, Santiago started giving away his things to friends.

Every room in his apartment is now filled with boxes of his life’s stuff—vinyl records, books, ties, hats, musical instruments. Another tenant in the building told Santiago that he was not leaving that easily and would try and fight the eviction. That woke Santiago up.

“Twenty thousand dollars is not going to last. Across the street, a one bedroom is (renting out for) $4,000,” he said.

A US Census Bureau report released last year shows that San Francisco now has the highest median rent in the nation, pushed up by the arrival of new, wealthy residents from the tech industry.

Lawyers and advocates for elders have told Santiago that as a senior, he could get a reprieve and continue to live in his home until December. “What comes after? I see a big question mark,” he said.

Santiago stoically goes down his short list of options: Relatives do not have room for him; he’s putting in bids for low-income housing; he’s hoping a Catholic-run retirement home for impoverished seniors, Saint Anne’s Little Sisters of the Poor, will take him.

He has even thought of enrolling in a gym that operates 24 hours, seven days a week—because that would be a roof over his head.

“At least, there’s a shower there, and I could stay clean,” he said.

Santiago has weathered tough times before. He’s lived in a janitor’s closet, trading that sleeping space for doing odd office jobs. Poverty and hardship are nothing new to him.

It’s only when he talks of the other elderly San Franciscans who have been evicted that his voice shakes with grief. Santiago’s eyes fill with tears as he recalls the story of an elderly woman who eventually died on the streets, homeless, after she was evicted in 1994.

“She could have been a mother or a grandmother,” Santiago said. “My wishful thinking is for these [real estate] speculators to have a conscience. They may have a lot of money, but how do they feel when a mother or grandmother is out on the streets?”

He stops. He’s unable to speak for a few minutes. He silently cries for poor, elders, people with disabilities, and the families who, like him, face an uncertain future in a city that has no more room for them—even if they’ve known no other home but San Francisco.

Santiago’s mind wanders to memories of his childhood. “As a Filipino child and teenager growing up in San Francisco, I was always the youngest, the runt in the group,” Santiago recalled. Whenever confronted by bullies, he would let the bigger boys do the fighting, while he ran away.

“Now, I’m too old to run. I have to stand my ground and take whatever political and economic blows they can throw,” he said.

Santiago has become part of a protest movement to amend California’s Ellis Act, the law that allows landlords to evict tenants in order to sell the rental apartments as condo units.

He is also one of several evicted seniors who have filed criminal complaints in San Francisco of elder abuse against their landlords in early February.

The seniors say evicting them endangers and inflicts physical and emotional harm on them, a violation of California Penal Code 368, which protects elders and dependent adults.

“I’ll stay here, meeting the challenge instead of turning around and exiting. It’s not just for me. I’m doing this for seniors and those with disabilities,” he said.

Finally, says Santiago, he’s learning to stand up to his bullies.

This article is part of New America Media’s Special Report, “Old and Poor in Tech City,” in collaboration with Central City Extra, focusing on the effects of the tech boom on low-income elders in San Francisco’s inner city.

To see coverage from this Special Report, click here. This special report is part of NAM’s in-depth coverage of issues affecting seniors, funded by The Atlantic Philanthropies.

The Retirement of Anita Sanchez

The life and times of Alex Esclamado