MANILA, Philippines—Stronger government leadership is needed for the recovery of the coconut farmers and fisherfolk struggling to rebuild their communities that were devastated by Typhoon “Yolanda,” according to nongovernment organizations (NGOs) led by Oxfam. 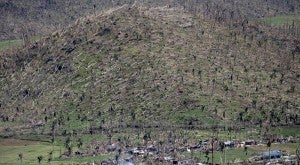 A mountain in Leyte with toppled coconut trees after the Nov. 8 Supertyphoon “Yolanda” lashed Leyte and other provinces in central Philippines. AP FILE PHOTO

“Many of the lower income municipalities are struggling to recover after Yolanda and are heavily dependent on private sector companies, the United Nations or NGOs for rehabilitation support,” the groups noted.

“Government attention and investment in these areas are required to ensure that people do not fall further into poverty,” the groups said in a statement.

Justin Morgan, Oxfam country director, said: “This is a critical moment in the recovery after typhoon Yolanda. Government must play a strong leadership role and provide transparency and accountability in terms of plans and how resources will flow, especially to local governments and communities.”

“Fishing communities and coconut farmers are some of the poorest people in the areas affected by Yolanda. Women fisherfolk and farmers are particularly overlooked for support as they are less likely to be on the official registers,” the NGOs said.

In the statement, Oxfam, NGOs for Fisheries Reform (NFR) and Fair Trade Alliance (FairTrade) proposed a number of actions the government could take for a more effective rehabilitation effort in Leyte and Samar, the two hardest-hit provinces by Yolanda in November last year.

They urged faster distribution of chain saws, slicers and sawmills to local government units in Yolanda-affected areas; the immediate funding of related fuel and maintenance costs and the provision of training and skilled personnel.

The groups also urged the distribution of seeds and other inputs to enable farmers to grow vegetables as emergency food and income sources.

They also sought the implementation of the Integrated Coconut Industry and Poverty Reduction Roadmap, and to harmonize its implementation with existing efforts for the recovery and rehabilitation of the coconut industry, including the establishment of a Coco Industry Development Trust Fund with the controversial coco levy funds.

The NGOs also said that fisherfolk affected by Yolanda must not only be provided with boats and fishing equipment, but also facilities for drying, processing and storing fish.

“The Department of Agriculture must ensure that women are also recognized as fisherfolk, and are included in the official government fisherfolk registry,” they added.

The NGOs are holding a series of roundtable forums with the governors of Leyte and Eastern Samar, and the mayors of Tacloban, Palo, Tolosa, Llorente, Guiuan and Hernani towns, to call for both immediate and long-term support.

More than 100 people from the affected towns in Leyte and Eastern Samar are expected to attend, including coconut farmers and fisherfolk, as well as representatives from the provincial and municipal governments, and national and local line agencies.