The Retirement of Anita Sanchez 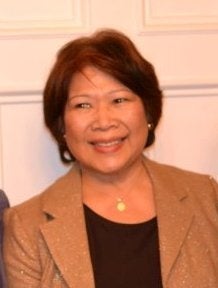 SAN FRANCISCO—The Ella Hill Hutch Community Center in the Western Addition features an outdoor mural filled with portraits of past African American community leaders considered as role models for future generations of African-Americans. Five San Francisco public schools have been renamed to honor many of those in the mural including Ida B. Wells, Enola Maxwell and Charles Drew. The street directly in front of City Hall was renamed after another mural figure, Dr. Carlton P. Goodlett.

If a similar kind of mural is made featuring distinguished leaders of the Filipino American community, the portrait of Anita Sanchez, San Francisco city government’s only current department head, will certainly be on it. On Friday, June 29, she will be honored at San Francisco’s City Hall on the occasion of her retirement as Executive Director of the San Francisco Civil Service Commission which oversees the merit system for the employment of the city’s 25,000 employees.

Anita immigrated to San Francisco in 1960 when she was barely10 years old. Her father, Bonifacio Sanchez, was recruited into the US Navy from his native Iloilo in 1924 when he was 17. After an absence of 23 years serving the US Navy in various ships throughout the world, Bonifacio, by then a naturalized US citizen, returned to Iloilo in 1947 and married Adoracion Hubines, a young lass from his hometown. Two years later, Bonifacio retired from the US Navy and returned to Iloilo to live with his wife and build a family. Two boys and four girls later, Bonifacio relocated to the US in 1957. After securing a job in the US Postal Service in San Francisco, Bonifacio brought his family to join him in 1960.

When she first arrived in San Francisco, Anita could only speak Ilonggo  (Hiligaynon) but she quickly learned English in school and Tagalog in the streets. There were very few Filipinos in those days as legal immigration to the US from the Philippines was limited by quota to just 50 a year – from 1935 until 1965 when it increased to 20,000. As Anita and her siblings were born as US citizens, they were not included in the annual quota.

While enrolled at San Francisco State University in 1968, Anita joined the student strike that was led by her friend, Ron Quidachay –  then a leader of the Pilipino American Collegiate Endeavor (PACE) and now a Superior Court Judge – that successfully pushed for the creation of a School of Ethnic Studies that would offer classes like Philippine history and culture.

Her student activism led Anita to include community involvement as an integral part of her regular academic work. With a modest grant from the Real Alternative Program (RAP), Anita organized the United Filipino Youth Organization (UFYO) and set up a storefront on 14th and Valencia in the Mission District for young FilAm high school kids to hang out after school. When any of the FilAm kids would get in trouble with the law, Anita would trudge over to Juvenile Hall and speak with them and with their probation officers to work out a probation plan to secure their release.

“The hardest part was often dealing with disappointed Filipino parents who would turn their backs on their kids just when their kids needed them the most,” she recalls. “Many of the parents believed in the foolish notion that their kids should spend time in jail to teach them a lesson.” Anita explained to the parents that exposing their kids to hard-core criminals in jail would teach them lessons alright, but not the kind that would rehabilitate them.

Joe Robles was one of those hard-core kids I met at Anita’s UFYO office in 1971 when he was UFYO president. Joe was later drafted into the US Army where he survived Vietnam, and returned to become a distinguished San Francisco Police Officer who regularly organized summer basketball leagues for young FilAm kids.

In the course of working on her Master’s degree in Social Work, Anita was involved with the United Filipino Association (UFA) led by Rev. Tony Ubalde, Bulitt Marasigan and Emil De Guzman, the fiscal agency that operated the International Hotel that housed manongs who immigrated as farmworkers in the 1930s. In the South of Market (SOMA), Anita worked with Pete Almazol and Joe Labrador of Bayanihan House, Tony Grafilo and Lem Ignacio of the Pilipino Organizing Committee (POC) and four other FilAm service agencies to build a consortium of Filipino community service agencies that would apply for foundation grants and city funding. It would be called the West Bay Pilipino Multi-Service Center headed by Ed De la Cruz.

While lobbying in Sacramento for California accrediting agencies to officially recognize the college degrees of Foreign Medical Graduates (FMG), Anita met San Francisco Assemblyman Art Agnos who was so impressed with her advocacy work that he offered her a job as his aide which she accepted. Through her work in the California Assembly, Anita was able to secure the passage of legislation that benefited the Filipino community and other communities.

Anita was eager to return back to San Francisco so she accepted an offer from Mayor Dianne Feinstein, whom she met through FilAm community leader Jess Esteva, to be her Special Assistant for Administration. Anita once joked that Filipinos were Feinstein’s favorite ethnic community because, unlike other communities who would demand that the mayor appoint their members to to major commissions, or to head certain city departments and or to obtain major funding for their community programs, Filipinos would often go to her office with simple requests for photos with her and, if they were so bold, to have the photos autographed.

The photos of these FilAm community leaders posing with Mayor Feinstein would then appear on the front pages of local FilAm community newspapers to give the impression that they were close to the mayor. We called this self-deceiving practice “lumpia politics” which ensured a power-less community that was not at all a factor in local politics.

In the afterglow of People Power in 1986, Anita worked with community leaders who sought to unify the fractured Filipino community in the US that had been divided into “pro” and “anti” Marcos camps. As the group, under the leadership of Philippine News publisher Alex Esclamado, regularly  met on Saturday mornings at a restaurant in Daly City, we informally called ourselves the “Lyon’s Club”. In those meetings, Anita was part of planning the National Unity Conference that was held in the summer of 1987 in Anaheim, California which drew 1,500 delegates from throughout the US. We formed the National Filipino American Council (NFAC) with Dennis Normandy as national chair and myself as national vice-chair.

Towards the end of Feinstein’s term as mayor, Anita enthusiastically backed the candidacy of her old boss, Art Agnos, in his bid to succeed Feinstein. Anita arranged a meeting for leaders of the Filipino community to meet Agnos and to tell him what we wanted to see in an Agnos administration. Anita aimed to steer our attention away from Philippine politics to local politics.

In that community meeting with Agnos, we expressed our disappointment with previous mayors who appointed Filipinos only to minor commissions and who never appointed any Filipino to head a city department. We also wanted our fair share of funding for our Filipino community programs. In short, we wanted to be empowered just like the other assertive communities. Agnos promised to support our goals.

During that 1987 mayoral campaign, we registered an unprecedented number of voters in the FilAm community, volunteered as precinct captains, held fundraisers, did phone banking and campaigned door-to-door in FilAm neighborhoods throughout the city for him. On election night, our hard work paid off – Agnos garnered 70% of the votes in a resounding victory.

It was the golden age of Filipino empowerment in San Francisco and it inspired FilAms throughout the Bay Area to seek to also empower themselves. None of this would have been possible if it wasn’t for Anita’s guidance and her behind-the-scenes influence on Mayor Agnos.

After Agnos lost his bid for reelection 1991, Anita went across the Bay to work as Chief of Staff of Oakland Assemblywoman Barbara Lee from 1993 to 1996. In 1997, she returned to San Francisco to work as Assistant Executive Officer of the City’s Civil Service Commission. In that same year, she rose to the top post where she has served until her retirement this month.

San Francisco Mayor Ed Lee, who has personally known Anita for more than 30 years, has proclaimed June 29 as Anita Sanchez Day in San Francisco describing her as “one of the hardest working public servants committed to policies and procedures that impact thousands of San Franciscans.”

One day in the future when there is a park, a school or a street in San Francisco named after Anita Sanchez , a young Pinay immigrant will inquire about Anita. She will then be told about Anita’s work to improve the lives of San Franciscans and of her proud kababayans. That young Pinay will be inspired to grow up to become an Anita Sanchez.

As Mayor Lee said, “we wish her all the best for a well-deserved retirement.”