No Filipinos hurt or involved in Venezuela crisis—Palace 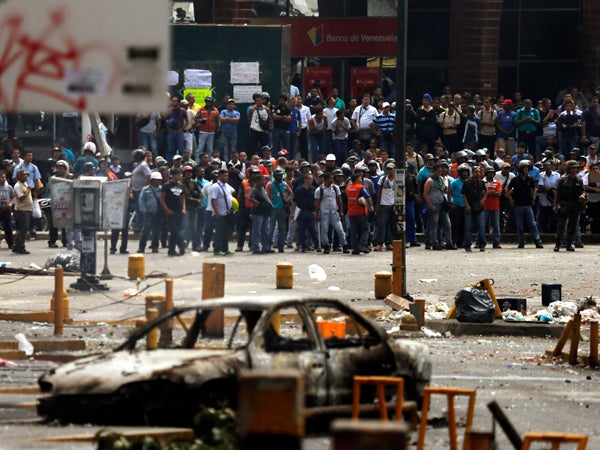 Motorcyclists watch Bolivarian National Guards arrive after the motorcyclists tried to remove street barricades placed anti-government protesters, which broke out in clashes between them and the residents of Los Ruices neighborhood in Caracas, Venezuela, Thursday, March 6, 2014. The car in the foreground was burned during the clashes that officials say killed a National Guard member and a civilian. AP

MANILA, Philippines – Malacañang said it has not yet received reports of Filipinos hurt or involved in the political unrest in Venezuela.

“So far, we have not gotten reports of any Filipino who has been injured, or at least involved in the mass actions, and hopefully, it stays that way,” presidential deputy spokesperson Abigail Valte said at a televised press briefing on Friday.

Venezuela is in a political crisis amid violent clashes between protesters and government supporters and troops.

The protesters were calling for the resignation of President Nicolas Maduro over the country’s economic woes. Maduro succeeded the late Hugo Chavez.

Valte said in her experience, Filipinos tend to follow the orders of the Department of Foreign Affairs (DFA), which issued a crisis alert level 2 in Venezuela.

The DFA told Filipinos there to limit their movements and prepare for possible evacuation.

Overseas Filipino workers with existing contracts in Venezuela are the only ones that will be allowed to return to the country while newly-hired workers would no longer be deployed by the Department of Labor and Employment, the DFA said.

Foreign affairs spokesperson Raul Hernandez said there is an estimated 104 Filipino nationals in the strife-torn country. Meanwhile, the Commission on Filipinos Overseas said there are 263 Filipinos in Venezuela as of December 2012.

OFWs in Venezuela told to prepare for evacuation