Fil-Ams are among advocates trying to reshape Long Beach, California

•Religious and community leaders vow to continue organizing on issues 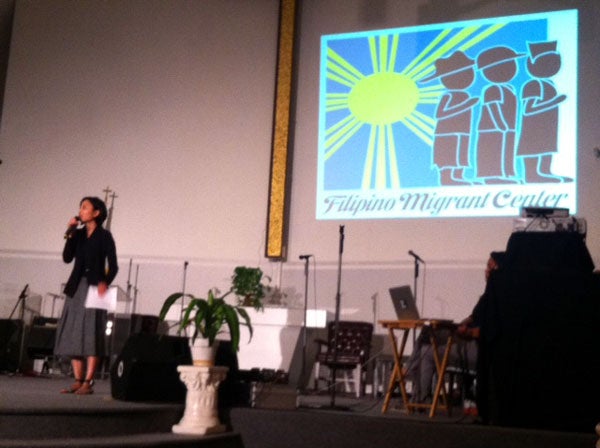 LONG BEACH, California — Some 300 hundred people gathered for “People’s State of the City” at Church One in 700 E. 70th St. to celebrate victories and discuss local issues, with the Filipino Migrant Center taking part in coordinating the event.

“We are making a statement that we do not need suffer every day — we are creating and uniting a stronger City,” announced Joanna Concepcion, Filipino Migrant Center board member.

April Sanchez, steering committee member of the Long Beach Coalition for Good Jobs and a Healthy Community, added, “We have to educate, organize and mobilize.”

The program summarized the progress of local advocacies and emphasized the power of voting and helping campaigns in behalf of working class needs.

“I’m a Pastor, but also an activist who helped organize truck workers,” said Bishop W. Todd Ervin, Senior Pastor at Church One. “I am connected with a non-profit Rainbow push founded by Jesse Jackson. Wherever there is injustice, that is where I’ll be.”

Steven Neal, Council member, 9th District of Long Beach, asked the audience to “continue to organize and mobilize.” Neal, who is also a board member of Dare U to Care, stated, “To the people who came out today — we have made progress, change comes from the people.”

Some speakers noted that 25 percent of workers in the city are still at the poverty level with low-wage jobs, even while Long Beach has a lot of construction and development on going. Even teachers struggle to meet housing and child-care needs.

Approximately 200,000 children in Long Beach qualify for free child-care and are on a wait list, but the city cannot meet the demand with its current services.

Many Long Beach residents live in a multifamily homes and at times in unhealthy and low quality rentals.

“We want people to know we are working for progressive change,” said Kerry Gallagher, executive director of Housing Long Beach.

Speakers shared personal stories on overcrowded housing and health issues of people living in their community.

“At one point I asked my mom for an inhaler because a lot of people in my class had one,” stated Kokayi Kwa Jitahidi, director of Los Angeles Alliance for a New Economy. “I had homies dying from gun shots and asthma!” added Jitahihi.

Some of the statistics presented at the gathering include: 1 out of 5 youth become pregnant; one student is suspended every 15 minutes; and one out of every five freshman attending a Long Beach Unified School District High School will not graduate.

Long Beach Unified School District made progress and passed a resolution for alternative and supportive policies to help tackle these issues.

Meanwhile, the road to quality higher education seems even more of a challenge. College tuition increased more than 300 percent with a student loan average of $17,000.

While students are paying more, there has been less funding for their education. Funding cuts have amounted to $800,000,000 since 2008, causing Long Beach City College to educate 24,000 students with only 1,400 regular staff members.

Cal State University Long Beach’s 4,000 faculty members were not spared from cuts in work hours but little to no cuts in work load.

“I think the most important thing is to connect our community with good green education programs that encourage seeking good jobs that will help rebuild the city,” said Stella Ursua, advocating for a more innovative practical training instead of high-cost university education.

“I think we have a knowledge transfer issue,” said Jitahidi, referring to the population of youth under 18, which make up 25 percent of the city’s population. They may know more about issues that affect them, but cannot vote yet. How can they make older people vote on their behalf, she posed.

Only 8-13% of the Long Beach population of 465,576 vote. Of this population 13 percent are Asians, Pacific Islanders, Native Americans and other nationalities.

“Tell people why they should care and that their vote matters!” stated Fil-Am Nikole Cababa of Anakbayan Los Angeles and Long Beach Coalition for Good Jobs and a Healthy Community.

Between speakers, Filipino Migrant Center members performed a wage-theft skit, One Billion Rising dance, and shared personal stories of how their poverty-stricken homeland left them with the need to create healthy change wherever they may be.

“Go out there, engage and get to know your community!” said Sanchez.