OFWs in Venezuela told to prepare for evacuation 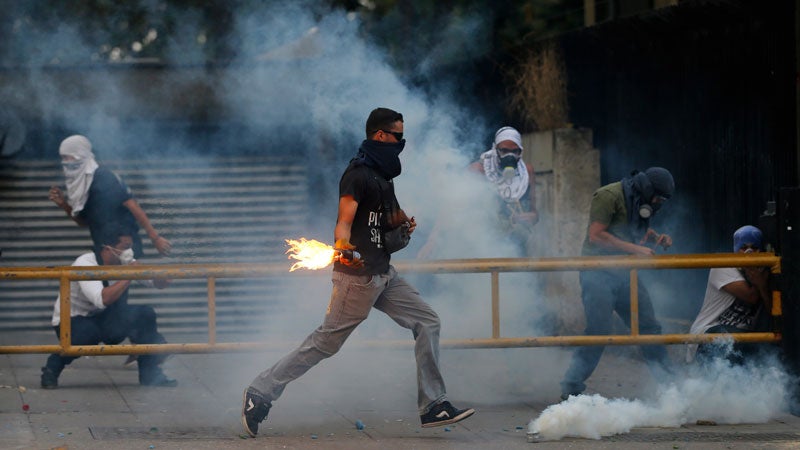 A demonstrator runs to throw a molotov bomb against Bolivarian National Police officers during clashes in Caracas, Venezuela, Thursday, March 6, 2014. A National Guardsman and a civilian were killed Thursday in a clash between residents of a Caracas neighborhood and armed men who tried to remove a barricade, Venezuelan officials said. (AP Photo/Fernando Llano)

MANILA, Philippines – Filipinos in Venezuela have been told to limit their movements and prepare for possible evacuation as the Department of Foreign Affairs (DFA) has raised crisis alert level 2 due to the continuing violence in the country.

“Filipinos in the area are advised to limit non-essential movements, to avoid public places, and to prepare for possible evacuation,” DFA spokesman Raul Hernandez said in a text advisory to reporters Friday.

The country is facing severe economic problems including a 56 percent inflation rate in 2013 which the activists are protesting. The violence escalated after three demonstrators were killed during a violent dispersal last Feb 12.

“The Philippine Embassy in Mexico, which has jurisdiction over Venezuela, has already dispatched a consular officer to Caracas to provide on the ground assessment, to coordinate with the Philippine Honorary Consul General in Venezuela, and to assist the estimated 104 Filipino nationals in that country,” Hernandez said.

Overseas Filipino workers with existing contracts in Venezuela are the only ones that will be allowed to return to the country while newly hired workers would no longer be deployed by the Department of Labor and Employment, DFA said.