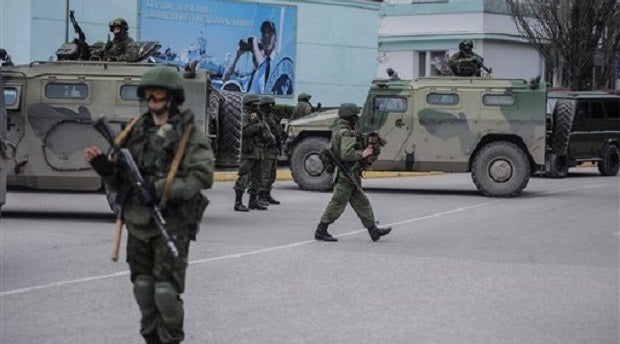 Troops in unmarked uniforms stand guard as they take control the Coast Guard offices in Balaklava on the outskirts of Sevastopol, Ukraine, Saturday, March 1, 2014. An emblem on one of the vehicles and their number plates identify them as belonging to the Russian military. AP FILE PHOTO

MANILA, Philippines — The Philippine Overseas Employment Administration is to temporarily ban the deployment of Filipinos intending to work in Ukraine in light of the mounting tension in that country.

“We will be implementing a deployment ban there for new hires,” said Labor Secretary Rosalinda Baldoz.

The Department of Foreign Affairs earlier declared crisis alert level 2 with respect to Ukraine, which means that Filipinos in that country are advised to restrict their movements and prepare for possible evacuation.

Baldoz said she would convene the members of the POEA governing board to deliberate on a resolution the proposed partial deployment ban.

“We will already deliberate on a resolution while awaiting the official transmission of DFA recommendation on the situation in Ukraine,” said Baldoz, the chairperson of the POEA governing board.

Baldoz pointed out that workers returning to their jobs in Ukraine are not covered by the ban on new delpoyments.

“Returning workers are not yet covered under Alert Level 2,” said Baldoz.

POEA data show there are 175 Filipino workers in Ukraine, majority of whom are employed as administrative, managerial, and service workers.

Baldoz advised  Filipino workers in Ukraine to stay calm and stay home, and not make any unnecessary visits or detours to public places where marches or protests are being held.

She said POEA data show that only 115 OFWs were deployed to Ukraine in 2013 and 57 in 2012, or a total of 175. Forty one of the OFWs deployed were administrative and managerial workers, while 30 were service workers.

Timeline: A day of bloodshed in Kiev