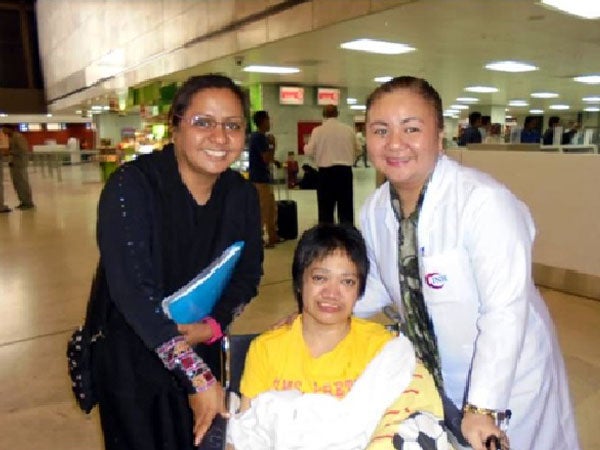 OFW Novelita Perez poses with Consulate representative Hazel Manahan-Mendoza and Dr. Grace Gonzales of the Jeddah National Hospital before departing for Manila. Perez suffered a stroke before she was able to obtain her exit visa but was assisted by the Consulate and the Filipino Community in Jeddah in her recovery and repatriation. Photo courtesy of Department of Foreign Affairs.

MANILA, Philippines — Paralyzed after a stroke and facing a P2.4 million hospital bill, a Filipino worker in Jeddah, Saudi Arabia was successfully brought home and reunited with her family through the combined effort of OFWs there.

Novelita Perez, 45, a resident of Caloocan City, suffered a stroke while she was in the process of obtaining her exit visa during the Saudi Government’s crackdown against illegal foreign workers.

Perez, a household service worker, was brought to the Jeddah National Hospital (JNH) “where she was cared for by the mostly Filipino staff,” the Department of Foreign Affairs (DFA) said in a statement Wednesday.

“The Philippine Consulate General (PCG) in Jeddah, with assistance from JNH doctors Grace Gonzales and Alex Tan, successfully negotiated for a substantial reduction in her hospital bill,” DFA said.

Perez was flown back to the Philippines and reunited with her family on March 2, it said.

The PCG in Jeddah has repatriated 4,231 undocumented OFWs as of January 23, 2014 since the crackdown began.

“The PCG repatriated at least 4,167 Filipinos in 2013, a year of crisis in mass repatriation which was brought about by the Saudi Kingdom’s campaign against illegal workers,” DFAsaid in a previous statement.

“The number is four times the 1,197 deported by Saudi Arabia in 2012 and more than the 3,720 in 2011 when the host government issued an amnesty for overstaying workers,” it said.

Based on December 2012 records of the Commission on Filipinos Overseas, there are 1,267,658 permanent, temporary, and irregular Filipinos in Saudi Arabia. A large majority, 1.1 million, are temporary meaning those with a limited duration work contract.

Saudi Arabia is the top deployment destination for OFWs with 330,040 new hires and rehires deployed in 2012, according to data from the Philippine Overseas Employment Administration.