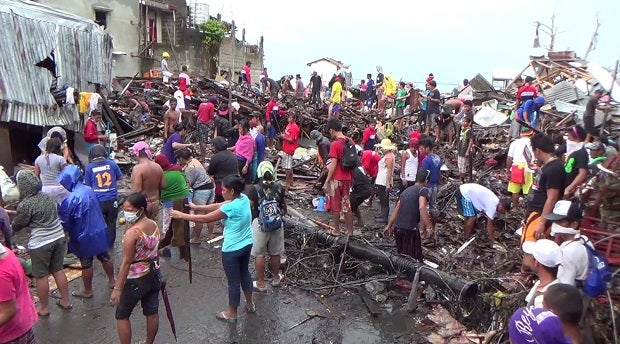 MANILA, Philippines — As part of continuing efforts to revive livelihood in typhoon-ravaged areas in the Visayas, agencies of the United Nations are set to distribute power tools to vulnerable populations in the hardest-hit communities to help clear debris and at the same time, gather materials to rebuild shelter.

The office of the UN High Commissioner for Refugees (UNHCR) and the International Organization on Migration (IOM) will distribute this week 500 chainsaws in villages in Guiuan, Tacloban and Ormoc to help clear out felled coconut trees and salvage those still usable as shelter materials.

The chainsaws, worth around $370,000 (about P16.6e million) were a donation from Swedish power tool maker Husqvarna, the UN Refugee Agency and IOM said in a joint statement.

The UN agencies said the effort “is seen to address the enormous need for temporary shelter and permanent homes that remains months after the disaster.”

“The chainsaws will empower typhoon survivors to take charge of their own recovery. They can use the coconut lumber they salvage as materials to rebuild their homes, while also clearing their communities of fallen trees,” said UNHCR Representative in the Philippines Bernard Kerblat.

The effort hopes to make productive use of some 33 million coconut trees that supertyphoon Yolanda’s lashing winds felled when it hit Eastern Visayas on Nov. 8. The typhoon affected at least 14 million, four million of them displaced.

“This donation will help facilitate the large-scale effort of the [Philippine government], the international community and, especially, the Filipino population and civil society to rebuild safer shelters in the wake of the destruction caused by Yolanda,” said IOM Chief of Mission in the Philippines Marco Boasso.

“The provision of shelter is a very important, but by no means the only, element in a longer process of advancing durable solutions for the displaced population and reducing exposure to future disasters,” he said in a statement.

UN’s early recovery programs continued on the ground as the world body warned of a possible second wave of “acute humanitarian needs” while the Philippine government’s long-term plan has yet to bear fruit.

The UN humanitarian country team in the Philippines cited this danger in laying down its Early Recovery, Livelihood and Agriculture Plan released Feb. 28, noting the remaining “large numbers of vulnerable people” even as relief operations, including the distribution of emergency food and water, would be phased out by May.

The world body noted the urgency of implementing interim measures, saying the impact of the government’s Reconstruction Assistance on Yolanda (RAY) plan, the comprehensive rebuilding blueprint for typhoon-affected areas, “is not expected to concretize within the next six-month period.”

“With the longer-term recovery programmes of the Government yet to start, there is a significant risk of a resurgence of acute humanitarian needs unless immediate action is taken to fill the gap in restarting livelihoods and the delivery of basic social services until Government recovery programmes kick in,” the UN plan read.

The new plan, which covers nine months of early recovery interventions (March to November 2014), lays down priority activities to support the local workforce.

These interventions include debris removal, providing boats and fishing gear to fishermen, training on mangrove and seaweed farming, support for the agriculture workers, granting capital to small-scale entrepreneurs, and training through the Technical Education and Skills Development Authority, particularly in skills related to construction (i.e. carpentry, masonry, tiling, welding among others).