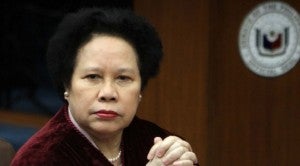 MANILA, Philippines—Voting 17 with no objection, the Senate on Tuesday concurred the ratification  of separate extradition  treaties between the Philippines and the governments of the United Kingdom, India and Spain.

Under the Constitution, a treaty or international agreement must be concurred in by at least two-thirds of the members of the Senate to be valid and effective, said Senator Miriam Defensor-Santiago, who sponsored  Senate Resolution No. 535, 536 and 537 on the floor.

The  chamber had to suspend its three-day rule  to immediately  approve the  measures.

Santiago, head of the committee on foreign affairs, said the “extradition treaties are considered to be the most effective mechanism in obtaining the return of international fugitives in order for them to face the consequences of their criminal actions.”

“Criminals will have fewer places to run and hide in once these treaties become effective. Because of easier and faster means of international travel, the flight of rich criminals from one country to another to evade prosecution or commit crime has become more frequent,” she said in a statement.

“Corrupt politicians and their partners-in-crime have a tendency to flee to other countries to escape the long arm of justice. We are making sure that arm is longer and stronger. They should have nowhere to hide,” she added.

Santiago said the Philippines’ extradition treaties with the UK, Spain, and India “adopt the dual criminality rule, which means that for an offense to be extraditable, it must be punishable in both the requesting state and the requested state, subject to certain conditions provided in the treaty.”

All three extradition treaties, she said, have a retroactive effect.

“The treaties are applicable to offenses committed prior to the entry into force of the treaties. This means that we can extradite the plunder criminals if they flee to the UK, Spain, or India, even though the plunder was committed before the effectivity of the extradition treaties,”  the senator pointed out.

Under the extradition treaties, Santiago said, “the contracting state parties undertake to extradite or surrender to each other any person who is wanted for prosecution, imposition or enforcement of a criminal sentence in the Requesting State for an extraditable offense.”

She said the increasing rate of transnational crimes such as terrorism, money laundering, corruption, human trafficking, and violations of human rights necessitates treaties as important operational tools in the pursuit of justice and public safety.

“These treaties also fulfill the Philippines’ international obligations under multilateral treaties like the Convention against Transnational Organized Crime, which obligates state parties to strengthen cooperation with other states in the field of extradition, mutual legal assistance, and law enforcement,” she said.