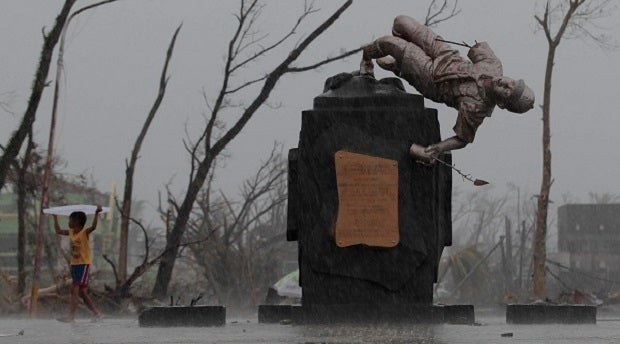 A young survivor uses a plastic cover to protect him from rain as he passes by a damaged Boy Scout statue at typhoon ravaged Tacloban city, Leyte province, central Philippines on Tuesday, Nov. 12, 2013. AP FILE PHOTO

TACLOBAN CITY, Philippines—The first time Thuy Do was on Philippine soil, she was a 9-year-old Vietnamese refugee, fleeing a war she did not want. This week, she returned as a 31-year-old American doctor treating typhoon victims, and waging a war she wants to win.

That war is her generation’s fight against global warming, which, she believes—and shared by a global consensus of scientists—is responsible for the increasing ferocity of storms and typhoons like Supertyphoon “Yolanda” (international name: Haiyan) in the Pacific and elsewhere.

“It’s a scientific fact that global warming is happening and making typhoons like Yolanda more potent,” Do said. “Our challenge as a generation is that we can and should do more to raise awareness about it.”

Do’s environmental activism is rooted in part by her personal experience where, in the late 1980s, as a young girl from the rice farming community of Kien Giang, close to the Mekong River delta, she learned about thousands of her former compatriots drowning in typhoon-buffeted rickety boats as they tried to escape war in their homeland under appalling conditions.

But this week, Do is with a 22-member medical mission composed of Vietnamese-American doctors, nurses, dentists, pharmacists, other medical personnel and journalists from Houston, Texas, who responded to the medical needs of Yolanda’s victims and survivors.

The mission was organized by Dr. Tam Huu Pham, a 47-year-old medical doctor who is also a Catholic priest. It was coordinated locally by Dr. Robert Salazar, 50, a Tacloban native with a successful private practice as a pulmonologist in Katy, Texas.

“It’s payback time. We owe a lot to the Filipinos. This is our way of saying thank you,” said Duong Phuc, who at 68 is the oldest member of the contingent and one of the “boat people,” the derisive word used by the West to describe the endless exodus of more than a million Vietnamese who fled the civil war in their country in rickety boats.

“We went through a lot, I mean a lot,” Phuc said, tears welling in his eyes.

Going through a lot is also the life story of Do, who arrived in the Bataan Refugee Processing Zone in early 1991 as a 9-year-old asylum seeker.

She would be admitted as a refugee together with her father, mother and four siblings, including an Amerasian relative who would be their eventual ticket to America.

Before that, her father, mother and brother were thrown in prison on suspicion by their own government of betrayal for attempting to leave their country.

When they were released from prison, there would be four more unsuccessful attempts to leave until they finally reached Bataan shortly after the Mt. Pinatubo eruption in June of 1991.

Although they stayed only six months at the refugee camp, the sojourn would prove beneficial to Do and her siblings, as they would learn their first English words from a Filipino English teacher there.

“It was our window to the American way of life,” Do said.

When Do and her family arrived in Houston in 1992, they would learn that starting a new life in America was not easy at all.

“There were no bilingual programs, they just threw me in a classroom with regular American kids,” Do said.

Her parents could not find work in Texas so they decided to relocate to Seattle, Washington, where there would be better economic opportunities for Vietnamese immigrants like them.

With hard work and persistence, Do would get American citizenship with the rest of her family and she would get admission to the prestigious family medicine program at  University of Washington in Seattle where she completed the program in 2010.

Asked why she chose family medicine, Do said, “I feel at home and I am most comfortable treating young people and the elderly.”

Do’s rise to attain her American Dream and acquire a certain degree of status and affluence in the United States has become the norm for most Vietnamese immigrants.

For the elderly Phuc, who now owns a radio and TV station as well as a newspaper in the Houston area, it is an affirmation of his belief that if you do good to others, the act will ultimately go back to benefit the giver.

“We are thankful to America, but we are also thankful to the Filipinos, because without those refugee camps in Bataan and Palawan, where will we be?” Phuc said.

Do’s affinity for anything Filipino would end up with her marrying Jesse Robbins, a 32-year-old IT student whom she met at University of Washington. His mom is a Filipino from Quezon City. Robbins and Do are devout Catholics.

“As you can see, the Philippines is very close to my heart, not only because of what happened in Bataan when I was 9 years old,” Do said.

This Sunday, Do, who is eager to have a family soon, will meet for the first time her extended Filipino family in Quezon City.

“Looking forward to it,” Do said, smiling with her husband close by nodding with approval.

Once upon a Vietnamese refugee camp

Grateful Vietnamese in US holding Yolanda fund drive for PH