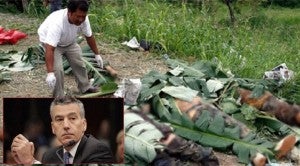 United States Ambassador to the Philippines Philip Goldberg on Saturday said his government remained committed to assisting the Philippines deal with “human rights challenges” in the face of a US State Department report criticizing the country for failing to stamp out extrajudicial killings.

“The US government continues to render assistance directed toward judicial efficiency and the reduction of case backlogs, law enforcement and prosecutorial capacity building, and sexual orientation and gender identity awareness,” Goldberg said in a statement.

The criticism of the Philippines, a former US colony that relies heavily on US defense aid, is part of a series of US State Department reports on the human rights situation in various countries.

The 2013 Country Reports on Human Rights Practices, the US State Department’s global annual human rights reports, were released on Thursday.

“The [Philippine] government continued to investigate and prosecute only a limited number of reported human rights abuses and concerns about impunity persisted,” the report said.

The “most significant human rights problems continued to be extrajudicial killings and enforced disappearances undertaken by security forces,” it added.

The report also listed as significant problems a dysfunctional criminal justice system notable for poor cooperation between police and investigators, few prosecutions and lengthy procedural delays, and the widespread official corruption and abuse of power.

The report, however, recognized some achievements of the Philippines, such as the three convictions in cases of extrajudicial killings in 2013.

It also noted the continued work of the interagency committee on extrajudicial killings and other grave human rights violations established by Administrative Order No. 35 as well as progress made in key high-level corruption investigations and cases.

In his statement, Goldberg said that after a recent meeting with Philippine officials, “it’s clear to me that extrajudicial killings remain foremost among the human rights challenges in the Philippines.”

He said he was “encouraged by the Philippines’ recent extrajudicial killings convictions and urged that the government spare nothing in its efforts to protect the right of free expression and bring those responsible for these horrendous crimes to justice.”

Deputy presidential spokesperson Abigail Valte on Saturday said the government was taking note of the criticism from a key ally and aid donor.

“We’ll have the national government agencies go through it and address particular areas of concern, focusing on what can be done to further our efforts” to improve, she added.

Mark Cebreros, spokesperson for the Commission on Human Rights, said much of the information in the US report actually came from the government agency.

“We acknowledge that there are few convictions for extrajudicial killings in this administration,” Cebreros told Agence France-Presse.

He said there had been improvements under President Benigno Aquino III, including a drop in extrajudicial killings.

But torture cases are still at the same level, he added.

The commission, which documents and investigates allegations of abuses, also cited other problems, like lengthy trials and overcrowded prisons.

“We are talking about the entire criminal justice process,” Cebreros said.

Human rights organizations allege that the Philippines suffers from a “culture of impunity” where powerful men feel they can commit abuses without fear of punishment.

In the worst such incident in Maguindanao province in 2009, the Ampatauan political clan allegedly murdered 58 people, including members of a rival clan, lawyers and journalists to prevent a rival from running for a local post against one of its members.

Despite a global outcry, the trial of the accused has dragged on for years and many suspects still remain at large. With a report from AFP