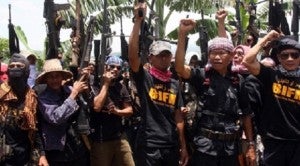 International monitors observing government talks with Muslim rebels expressed confidence on Friday that efforts to end one of Asia’s bloodiest and longest insurgencies will survive derailing attempts by hardline guerrillas.

“Both parties realized from the beginning that there will always be parties who disagree … who take their disagreement to the point of trying to disrupt the process,” the monitoring group’s chair Alistair MacDonald said.

“But as far as seeing widespread support for such views, we have not seen that,” said MacDonald, a retired European Union ambassador to the Philippines.

The rebellion has claimed an estimated 150,000 lives, mostly civilians.

Followers of Nur Misuari, founder of the MILF’s rival guerrilla faction, the Moro National Liberation Front (MNLF), also attacked the southern port of Zamboanga in September last year in an effort to wreck the talks, leaving more than 220 people dead.

The more the peace process moves forward, “the less there will be an opportunity for the spoilers to throw sand in the wheels,” he added.

Another monitoring team member, Huseyin Oruc meanwhile warned spoilers could also crop up from the government side, disrupting the passage of laws needed to implement the peace deal.

The key piece of legislation would be an organic law that President Aquino wants passed by next year authorizing the creation of a Bangsamoro autonomous region in Mindanao.