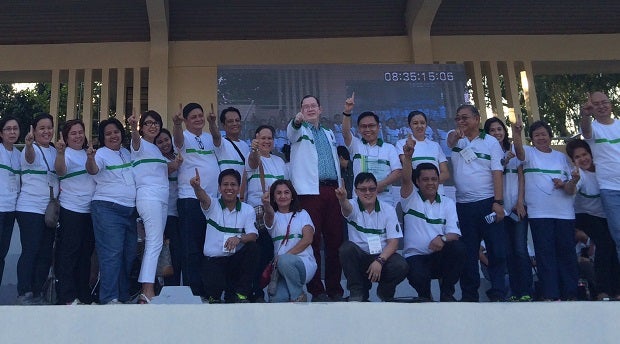 Assistant Health Secretary Dr. Eric Tayag (center), who danced to the tune of “Brave” while potential donors were enlisting at PUP on Friday, said he hopes the “I’m a Lifeline” campaign would help erase the stigma related to organ donations. CONTRIBUTED PHOTO/www.lifeline.ph

Amid a church warning that human organs are not for sale, the Philippines on Friday claimed to have set a world record for the biggest number of people who pledged to donate their organs in one hour and in one place.

At least 3,548 people pledged to be organ donors during the “I’m a Lifeline” campaign, a segment of which was held at Polytechnic University of the Philippines (PUP) in Sta. Mesa, Manila, from 9 a.m. to 10 a.m.

PUP was one of six sites where the simultaneous organ donation sign-ups were held.

Each potential donor will receive an organ donor card that they can put in their wallets and that specifies what organs can be harvested, officials said.

The campaign was organized by the Philippine Network for Organ Sharing (PhilNOS) under the Department of Health (DOH).

However, the Philippine record has yet to be validated by the Guinness World Records.

India holds the record of enlisting in a period of one hour and in one place a total of 2,755 people willing to donate their organs.

India also holds the record of gathering the most signatures—10,450 in all—of potential donors in a period of eight hours also in one place.

Dr. Antonio Paraiso, program manager of PhilNOS, said they would submit their data within 10 days to Guiness and expect results within three weeks to three months.

The signature-gathering campaign came amid warnings from a Catholic Church bishop.

Malolos Bishop Jose Oliveros said the Church supported organ donation as an act of charity but never for money-making purposes.

The former chair of the Catholic Bishops’ Conference of the Philippines (CBCP) Episcopal Commission on Bioethics said one may donate his or her organs for “altruistic motives” and the Church supported such an act.

“We may not sell our body organs but we may donate them as an act of charity,” Oliveros said.

The prelate was reiterating a five-year-old pastoral statement which says the Catholic Church encourages voluntary organ donation from living donors but condemns organ sale and trade.

According to the 2008 CBCP statement, human organ transplantation gives patients, particularly those with end-stage diseases, new hope for a decent lifestyle and a better quality of life.

“Human organ sale or trade … is morally unacceptable,” the CBCP has said. “It is contrary to the dignity of the human person, his or her authentic autonomy and the essential equality of all persons.”

It adds: “The dignity of the human person as an image of God includes not only his or her soul but his or her corporeal being. Hence, our body ought not to be treated as a commodity or object of commerce, which would amount to the … plundering of the human body.”

‘You can be a lifeline’

The registration for such an activity was still going on as of press time.

Paraiso said the event was more than just breaking a record.

“This is an awareness campaign on organ transplantation. You can be a lifeline now while you are still alive,” Paraiso said.

He said those who had signed up signified their willingness to donate their organs upon their death.

“Usually, those able to donate were those who died in an accident or in a violent manner,” he said.

“We have a lot of Filipinos who need organ donations. We hope this campaign would help erase the stigma related to organ donations. Be a lifeline,” said Assistant Health Secretary Dr. Eric Tayag, who danced to the tune of “Brave” while potential donors were enlisting at PUP.

“Isn’t donating an organ an act of bravery?” Tayag said.

The names of those who signed up will be placed in a national registry of potential organ donors.

“This is to ensure that we have a list of volunteers who are willing to donate their organs,” Paraiso said.

At least one Filipino dies every hour from kidney failure, which ranks as the ninth leading cause of death among Filipinos.

DOH figures show that about 10,000 cases of patients with kidney diseases are in dire need of transplants every year.

“Last year we had 36 people who died and donated their organs,” Paraiso said. “Overall, we have more than 500 organ donors ever since 1983. But the number of donors remains stagnant so we have to do something about it.”

“We have 23,000 patients on dialysis alone and treatment of choice for kidney failure is not dialysis, but kidney transplant,” Paraiso said.

He said kidneys and eyes (cornea) were the most “in-demand” organs.

“We have a long waiting list of recipients for that. However, once we start expanding the availability of other organs being transplanted, the waiting list will also grow.”

Paraiso said organ donation was not yet widely acceptable among Filipinos. “There are a lot of negative issues regarding organ donation,” he said.

Paraiso said the most common concern was that the organs would be harvested unethically.

Some feared doctors would deliberately remove a patient’s organs before the patient dies. Others believe that methods available to save a patient’s life would be withheld so that the patient could become eligible for organ donation.

“That is a paranoid attitude toward doctors, that’s not how it’s done,” Paraiso said.

Aira Aguilar, an 18-year-old accountancy student of PUP, admitted she had such a fear before deciding to register as a donor. But her willingness to help save the life of others and leave a legacy prevailed.

Paraiso said: “If you’re going to manage potential donor, for instance, a person with brain injury, his body will have to be kept healthy while treating his head injury. The rest of the body should be cared for, kept alive, the organs should remain viable.

“Before a person can become a cadaver donor, he or she must be certified as brain dead. Once tagged as brain dead, organs such as kidneys, the liver, pancreas, lungs, corneas and the heart can be harvested from the donor.”

Paraiso said doctors still asked the consent of the donor’s family before harvesting a donor’s organs.

Read Next
Rights abuses continue in PH–US report
EDITORS' PICK
Current dominant strain of COVID-19 more infectious than original—study
Water remains our saving grace right now
EuroMillions Superdraw: A lottery draw unlike any other is coming to the Philippines
DOLE: Return of OFWs’ remains from Saudi to be ‘delayed,’ deadline moved to ‘early next week’
Smart releases Hyun Bin’s second TVC
‘Justice will be done,’ Duterte assures as he vowed probe on Jolo incident to bare ‘truth’
MOST READ
Locsin warns of ‘severest response’ if China’s army drills in SCS ‘spill over’ to PH domain
Duterte tells military: No other president looked at you the way I did
Man who stole 2 cans of luncheon meat lands in jail in Manila
VP Leni Robredo: ‘Remember, you were made for these times’
Don't miss out on the latest news and information.