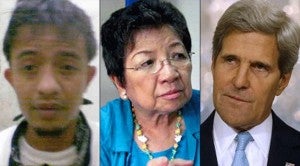 LOS ANGELES—Human rights abuses, including extrajudicial killings and enforced disappearances by government security forces, continued unabated in the Philippines in the past year, according to the US State Department’s 2014 Human Rights Report released here on Thursday.

The report also cited widespread corruption and abuse of power among government officials and a “dysfunctional criminal justice system” as some of the most significant problems abetting human rights violations in the country.

The State Department report documents each year the human rights conditions in the Philippines and more than 200 other countries and territories, identifying governments that the report says continue to tighten their grasp “on free expression, association, and assembly, using increasingly repressive laws, politically motivated prosecutions and even new technologies to deny citizens their universal human rights.”

“This is not some high-minded exercise, this is about accountability,” said US Secretary of State John Kerry, who submitted the report to the US Congress. “This is about ending impunity,” he added.

“The State Department’s report makes sense,” said Commission on Human Rights (CHR) Chair Etta Rosales, who agreed with the report that extrajudicial killings persist in the Philippines and that the country’s criminal justice system remains problematic.

“While there are efforts (by) the Armed Forces of the Philippines (AFP) to try and improve, it’s true that there are still extrajudicial killings.  (Though) they have been reduced, they’re still around and not yet eradicated,” she said.

The CHR chief said the military had laid down “good policies” on observing human rights, but had not ensured their enforcement by its ground personnel.

Rosales cited the court-martial of the soldiers who allegedly killed the wife and two sons of antimining tribal leader Daguil Capion on Oct. 18, 2012.

“I wish the military would hasten the trial. It’s taking them till kingdom come,” she said, adding that the AFP had also extended “some cooperation, but not full cooperation” in resolving the 2007 disappearance of activist Jonas Burgos who was allegedly abducted by military agents.

The report said the Aquino government continued to investigate and prosecute “only a limited number” of reported human rights abuses, and that “concerns about impunity persisted.”

One of the cases mentioned in the report was the fatal shooting of two alleged members of the Ozamiz criminal syndicate as they were being transported from Cavite province to Laguna province following court proceedings in July last year. Two police officers were charged while separate criminal complaints were filed against 14 others in connection with the killings.

Security forces under the Philippine National Police (PNP) were suspected to have been involved in at least six of the 26 new complaints of politically motivated killings investigated by the CHR, the report said.

“The long-running Muslim separatist and communist insurgencies continued to result in the displacement of civilians and the killing of soldiers and police in armed clashes,” the report added.

“The Moro National Islamic Liberation Front (MNLF) also conducted military operations against government security forces and civilians. These organizations continued to be linked (to) kidnappings for ransom, bombings that caused civilian casualties, reports of the use of child soldiers in combat or auxiliary roles, and unauthorized courts,” according to the report.

It also mentioned other human rights problems including the torture of prisoners, the killings and harassment of journalists, violence against women, the abuse and sexual exploitation of children, human trafficking, limited access to facilities for the disabled, lack of full integration of indigenous people, the absence of law and policy to protect persons from discrimination based on sexual orientation and gender identity, child labor, and ineffective enforcement of workers’ rights.

The report singled out Syria, Russia, China and Egypt for using restrictive laws to suppress political opposition, as well as minorities and journalists seeking to expose abuses. With a report by Dona Z. Pazzibugan

25 activists so far killed in Southern Mindanao under Aquino – Karapatan