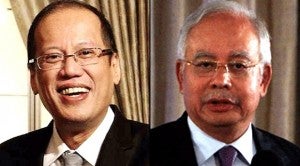 Najib told a joint news conference with President Aquino here on Friday that he had accepted the invitation.

An exact date has yet to be set, but Najib said he was invited to come to Manila “by the end of March” as he reiterated his government’s commitment to seeing the peace agreement through.

President Aquino counted the “reaffirmation” of Malaysia’s “help toward attaining peace” in Mindanao among the gains of his state visit, which ended on Friday night with a state banquet thrown in his honor by Malaysia’s King Abdul Halim at the Istana Negara, the national palace.

“People are generally aware that they (Malaysians) have been helping us, but I don’t know how many are aware that they have been helping us for a decade. There has been expense; there has been effort on their part—the facilitators, the monitoring team, and other components of the peace process,” Mr. Aquino said separately in an interview with reporters after his meeting with Najib.

To help in the transition, Malaysia offered to provide technical assistance in the training of Bangsamoro leaders, Najib said.

“Malaysia is delighted that we could play our part as a facilitator to support the peace process, and to add strength to that process, we will offer capacity building for the Bangsamoro people because the future government in southern Philippines will require them to have new skills to be part of the government in the future of that area,” he said.

Details of the training arrangement have yet to be released.

During expanded bilateral talks that included trade officials from both countries, Mr.  Aquino and Najib discussed enhancing business ties between the Philippines and Malaysia, particularly Malaysian investment in Mindanao in the palm oil industry.

“We believe that, just as Malaysia has been a reliable partner in pursuing our shared vision of a peaceful Mindanao, Malaysia can also further contribute to the development of the Land of Promise by encouraging their businesses to invest in Mindanao,” Mr. Aquino said.

He said Malaysia had expressed interest in acquiring the bank.

“They are willing to provide initial technical assistance as far as Islamic banking and financing are concerned. But they are asking if we will invite them to purchase the [bank]. Of course, it behooves us to get the people who are considered experts… That has to be worked out. There is no finality there yet,” Mr. Aquino said.

The President and Najib agreed that there was a big room for trade between the Philippines and Malaysia to expand, with the current bilateral trade volume pegged at $4.5 billion.

“I believe, in terms of trade and investment, particularly in areas of trade, there’s a lot more we can do between our two countries. Given the size of the Philippines, we believe that the potential is far greater than that, and both our governments agree that we should encourage the value and volume of bilateral trade to increase,” Najib said.

Mr. Aquino said the Malaysian side brought up the dispute over Sabah during his bilateral talks with Najib.

Malaysia brought up last year’s incident in Lahad Datu, Sabah, steering the discussion toward the unresolved dispute over the territory that the Philippines had long placed in the back burner.

The sultanate of Sulu sent about 200 fighters to Lahad Datu in February last year to retake Sabah, leading to a protracted standoff with Malaysian police and military troops.

The standoff ended in the rout of the Sulu fighters led by Agbimuddin Kiram, younger brother of Sulu Sultan Jamalul Kiram who died last year.

Mr. Aquino said prior to his departure for Malaysia that the Sabah dispute was not on the agenda of his talks with Najib.

“We told our Malaysian counterparts that we’re not after conflict with anybody. But we want to be able to tell our people the real score, and in that sense, come up to a consensus based on that which is right,” Mr. Aquino said.

He said the Malaysian side raised the issue of Sulu fighters currently facing trial in Lahad Datu.

Philippine Ambassador to Malaysia Eduardo Malaya said the trial of 27 Sulu fighters currently in Malaysian jails was in the prosecution phase, which was expected to be completed sometime in May.

The Philippine Embassy continues to provide legal assistance to the group, Malaya said.

During the talks, Mr. Aquino said the Malaysians reminded the Philippine side that the previous administration had agreed to establish consular presence in Kota Kinabalu.

He said the government was studying the detailed timeline on the sultanate of Sulu and the succession line, information that would help the government solidify its position on the dispute.

The President said the University of the Philippines would be tapped for the study.

The Philippines and Malaysia agreed to boost security cooperation, particularly sharing intelligence for “immediate interdiction” and “deterrence” in areas of common concern between the two countries: the Philippines’ backdoor and Malaysia’s easternmost border.

The agreement aims to deal with crime in the area, including abductions committed by bandits, Mr. Aquino said.

He said the two countries were looking to establish a hotline between the security forces of both sides in the event of an incident of mutual concern.

“We need to ensure immediate interdiction on our Malaysian side as well as the Philippine side, so that is a very important facet. Once we have peace and security, then trade and investment will flow in southern Philippines as well as in Sabah,” Najib said at the news conference.

Mr. Aquino meanwhile raised the issue of competing claims in the South China Sea, with Malaysia among the claimants to the resource-rich waterway.

The Philippines is asserting ownership of part of the waters within its exclusive economic zone, an area it calls the West Philippine Sea.

China claims almost all of the 3.5-million-square-kilometer South China Sea, including waters within the economic exclusion zones of its rivals for territory—the Philippines, Malaysia, Vietnam, Brunei and Taiwan.

Beijing has been aggressively asserting its claim, most recently firing water cannon at Filipino fishermen to drive them away from Panatag Shoal (Scarborough Shoal), a rich fishing ground off Zambales province in the West Philippine Sea.

The Philippines has taken its territorial dispute with China in the West Philippine Sea to the United Nations for arbitration.

Before leaving for Kuala Lumpur on Thursday, Mr. Aquino gave instructions to the Philippine Coast Guard not to make any move that China might take as provocation to avoid escalation of the Jan. 27 incident at Panatag Shoal.

Coast Guard vessels have been deployed to the area to protect Filipino fishermen against Chinese harassment.

Philippine officials, however, urged Malaysia, Vietnam and other claimants in the South China Sea  to join the Philippines’ legal challenge to China’s expansive claim in the UN arbitration tribunal.

Mr. Aquino said he and Najib stood on the same ground in upholding international law to settle the dispute and in working toward a solution through a multilateral approach within the framework of the Association of Southeast Asian Nations.

“The Prime Minister and I agreed on the peaceful settlement of disputes in the West Philippine Sea and the South China Sea, in accordance with the rule of law and the United Nations Convention on the Law of the Sea (Unclos),” Mr. Aquino said.

“We believe that adherence to the rule of law, positive engagement and sincere dialogue are fundamental, if we are to build a truly prosperous and peaceful Southeast Asia—a Southeast Asia where no one is left behind,” he said.

During their bilateral meeting on Friday, the two leaders also signed bilateral agreements for cultural cooperation and education exchange. With a report from Michael Lim Ubac