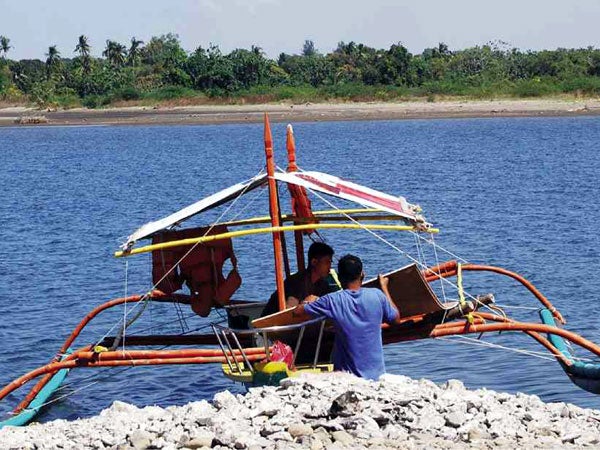 A FISHING boat is docked near the shore of Masinloc town, Zambales province. Two vessels with fishermen set out to sea on Thursday and Saturday for Scarborough Shoal, which Chinese aggressors are starting to occupy. ALLAN MACATUNO/INQUIRER CENTRAL LUZON

MASINLOC, Zambales, Philippines—Despite the trauma, fishermen have sailed back to Scarborough (Panatag) Shoal, braving harassment from Chinese coast guard vessels in order to eke out a living.

Mario Frones, a fishing boat operator, sent a boat to the shoal on Thursday and another today (Saturday, March 1), said Enrique Raquinio, 56, who serves as a dispatcher of fishing vessels in the area.

Frones owns the fishing boat that was driven away recently by the water cannons of Chinese coast guard vessels.

Some of the fishermen are now traumatized, especially those who were driven away by the cannons on Jan. 27 and Feb. 25, according to Rey Mapili, 38, a local fisherman.

A fisherman who was sprayed with water in the January encounter with the Chinese coast guard said he had been too scared to sail back, fearful that he would be hurt by the Chinese. He agreed to speak to the Inquirer on condition of anonymity.

“We will definitely go back there but we will be very careful this time. If we have to endure constant water cannon attacks, we will face it, so long as we will come back to our family with some good catch,” said Raquinio.

He added: “The Chinese coast guard vessels really intended to sink our boats when they fired water cannons at our fishermen. They were merciless. How are we going to prevent this from happening again? We cannot defend ourselves and our coast guard has not been protecting us.”

PO2 Rogelio Casupang, detachment commander of the Philippine Coast Guard here, said none of their vessels were patrolling the shoal.

He said they had been advising fishermen to steer clear of the shoal since 2012 to avoid an encounter with their Chinese counterparts.

“If they (local fishermen) are going to go near the shoal, they have to get clearance from us and we strongly advise them to stay at least 2 miles (3.22 kilometers) away from it so that we can avoid any encounter with the Chinese coast guard,” he said.

But fishermen ignore these warnings because fishing in the shoal is their only source of livelihood, he said.

Raquinio urged the government to assert the rights of Filipino fishermen so that they could continue fishing in the shoal, which, he said, “logically and geographically belongs to the country.”

Filipino fishermen and those from neighboring countries take refuge in the shoal during rough sea conditions, so the disputed shoal must be accessible to all fishermen, Raquinio said.

“If Chinese coast guard vessels keep driving us away from the shoal, which everyone considers a safe haven, then they don’t care about our safety,” he said.

The Inquirer learned this week that the task of securing the disputed waters has been transferred from the Armed Forces’ Northern Luzon Command (Nolcom) based in Tarlac City to the Western Command (Wescom) based in Palawan province following the water cannon attack in January.

Lt. Gen. Gregorio Pio Catapang, Nolcom chief, said the transfer was “necessary so that the external defense efforts in the West Philippine Sea (South China Sea) would be under a single commander.”

“This will ensure unity of command under one responsible commander,” he said. He also said the Nolcom, a unified command of Army, Navy and Air Force units in Central Luzon and the Ilocos, Cagayan Valley and Cordillera regions, could be “given specific tasks to support the Wescom mission as part of the overall effort in protecting our national interest in the West Philippine Sea.”

The Wescom oversees security in the West Philippine Sea flanking the Philippine west coast, including the Spratlys.

Tindog said the Armed Forces’ chief naval defense assets would be assigned to the Wescom. “Along with the expansion of the Wescom’s jurisdiction in the West Philippine Sea to include Bajo de Masinloc (another name for Scarborough Shoal) is the enhancement of our capability to upgrade our external defense,” she said.