UN says can do more in ‘Yolanda’ rehab efforts 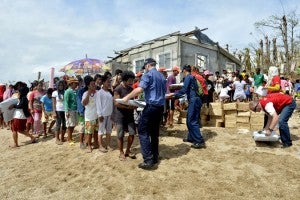 Royal Navy personnel from HMS Daring and medics from Save the Children hand out British-donated aid on Binuluanguan Island. File Photo courtesy of the British Embassy in Manila

MANILA, Philippines — Nearly four months after the maelstrom of Super Typhoon “Yolanda” landed on Eastern Visayas, the United Nations said that they can “do more” on the rehabilitation efforts in the area.

Valerie Amos, UN Undersecretary-General for Humanitarian Affairs, said that with the help from the Philippine government and the UN, additional help is always welcome.

“In disasters like these, there is always more you can do, the environment is challenging, and people lost everything,” Amos said Thursday afternoon at the Manila Peninsula.

Amos said that a large amount of support has to be given for the livelihood of people who rely heavily on fisheries and agriculture.

Amos, though, commended the people of Leyte for their resiliency in getting back up after “Yolanda” unleashed its haymaker.

“Tacloban today is almost unrecognizable from the city I saw in November,” Amos said. “Streets that were piled high with debris are now jammed with traffic.”

Amos added that the UN would still continue the support for the next nine months in the rehabilitation efforts, especially on shelter-building, in Leyte and other areas that “Yolanda” struck.

“We proved that we could make rapid progress in providing emergency shelter and assistance for people to rebuild their homes,” Amos said.

According to the UN, the $788 million appeal that they launched in December that would fund the rehabilitation operations is 46 percent complete, with an amount of $362,480,000.

Not stopping on the government support, Amos said that they would continue to “forge stronger” partnerships with the private sector to bolster the rehabilitation efforts.
RELATED STORIES