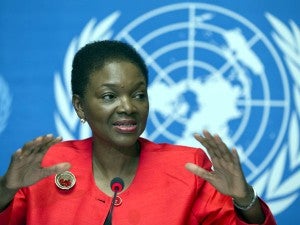 MANILA, Philippines—The United Nations’ emergency relief coordinator has renewed her call to the international community to sustain support for typhoon-ravaged areas in the Philippines.

In an appeal issued in New York, Amos noted the low funding for shelter-related programs and how persistent rains in typhoon-hit areas caused even more displacement.

The UN is appealing for $788 million to support relief and recovery programs under its Strategic Response Plan, which aims to support relief and early recovery activities for one year in the areas of food distribution, water, sanitation and hygiene, shelter, education, health and livelihood clusters, among others.

Donor contributions have reached $328 million as of Jan. 13, leaving a 58-percent funding gap, according to the UN Office for the Coordination of Humanitarian Affairs (Ocha).

“Two months after the storm, the scale and spread of humanitarian needs is still daunting. I am particularly concerned that just 20 percent of funding has been secured to provide tools and materials so that people can rebuild their homes,” said Amos in her appeal.

“[G]ood progress has been made in many areas but people are still dependent on humanitarian support, particularly to rebuild their homes,” she said.

The UN official, who visited the disaster zone in the Visayas twice during the early part of relief operations, also called attention to the impact of recent rains on communities where many remain displaced. Ocha had just reported delays in the delivery of aid to Yolanda-hit villages threatened by flooding and landslides.

“The rainy season is approaching fast, and early rains have already led to further displacement. Urgent funding is also needed for tools and seeds so that farmers are ready for the next planting season,” she said.

“During the next few months, the humanitarian community will focus on ensuring a smooth transition from urgent assistance to long-term recovery and rehabilitation efforts. We count on the continued support of donors for this work,” Amos said.

She noted how the work of government, donors, humanitarian agencies and affected communities themselves “have achieved a huge amount in the past two months,” but Amos noted the “delivery and reach of aid remains uneven.”

“Electricity supplies are unreliable in vast parts of the areas affected by the typhoon, hampering recovery efforts and business activities in urban areas including Tacloban. Many schools reopened on

Jan. 6, but there are shortages of learning spaces and school materials,” Amos said.

UN humanitarian chief continues to be amazed by Filipinos’ resiliency