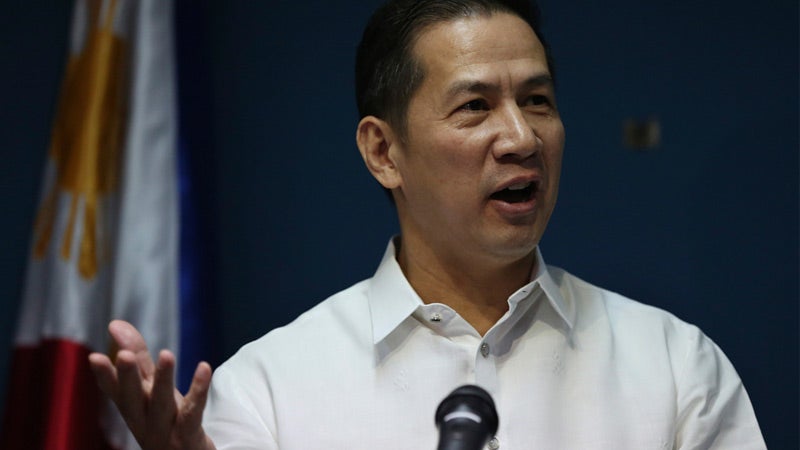 Philippine Foreign Affairs Department spokesman Raul Hernandez gestures as he answers questions from reporters during a press conference at Foreign Affairs headquarters in Pasay City on Tuesday, Feb. 25, 2014. The Philippines has called in a Chinese envoy to protest what it says was the firing of a water cannon by a Chinese government vessel on Filipino fishermen in a disputed shoal in the West Philippine Sea. AP PHOTO/AARON FAVILA

MANILA, Philippines—The Philippines on Tuesday strongly protested China’s water cannon attack on Filipino fishermen in a disputed shoal nearly a month ago, citing how such acts “escalate tensions” and “threaten the peace” in the region.

Lt. Col. Ramon Zagala, spokesman of the Armed Forces of the Philippines, told reporters that while the Chinese action was “alarming,” it did not warrant an immediate military response.

“I don’t think it would be appropriate if we send the Philippine Navy at this time. It will just escalate the situation,” Zagala said. “Rest assured that the Armed Forces will do its mandate when the time comes.”

The protest was received by the chargé d’affaires. The new Chinese ambassador-designate, Zhao Jinhua, who arrived on Sunday night, has yet to begin officially his tour of duty.

President Aquino said he wanted China to explain why its Coast Guard had fired water cannon at the fishermen.

“We’re not sure at this point in time if we can call it their standard operating procedure because as of yesterday, we had fishermen inside the shoal who (were) not being harassed or intimidated by any entity,” he told reporters during a visit to Cebu City, where he marked the 28th anniversary of the People Power Revolution, away from the site of the historic event on Edsa in Quezon City.

“We urge the Philippine side to work with the Chinese side to resolve differences through bilateral consultations and negotiations,” he said.

The Philippine protest covers the incident on Jan. 27, where a Chinese Coast Guard vessel allegedly sprayed Philippine vessels with water cannon, and nine other reported incidents of harassment Filipinos had reported against patroling Chinese ships, including occasions when they were barred to seek shelter in the shoal during bad weather, the DFA said.

There are currently no Philippine military or government ships around the shoal, having pulled out at the height of the tense standoff with Chinese vessels in 2012. The territory, located some 220 kilometers off Zambales province, is within the Philippines’ 370-km exclusive economic zone and 650 km from the nearest Chinese coast in Hainan.

Hernandez could not say if a redeployment of Philippine vessels was among options being considered to protect Philippine fishermen in the area.

He said the DFA was in consultation with the Philippine Coast Guard and the military on a possible course of action.

He said at least three Chinese fishing vessels would “come and go” in the shoal.

“The department likewise strongly protests the acts of harassment and the manner by which these were committed by China to forcefully drive away Philippine fishing vessels from Bajo de Masinloc. Finally, the department vehemently protests the acts of China when its law enforcement vessels drove away Philippine fishing vessels seeking shelter in the Philippines’ Bajo de Masinloc during inclement weather,” Hernandez said.

“These actions, [this] incident, surely escalate the tension in the area and this further threatens the peace and security and stability in the region,” he added.

The Philippines filed its latest protest against China after Armed Forces Chief of Staff Gen. Emmanuel Bautista during a news forum on Monday talked about the incident nearly a month ago.

For still unclear reasons, a Chinese Coast Guard vessel (Bow No. 3063) allegedly doused water on two Filipino vessels, FB P8 and FB Kim, as they plied the vicinity of the shoal. The vessels were among 14 small Philippine fishing boats present at the time.

Filipino fish trader Macario Forones said the Chinese used wastewater laden with oil while blowing the horn and yelling “Go away, go away” at his fishermen. One or two other Philippine fishing boats were hit by the wastewater, he said.

“The water smelled of oil and smeared the side of my fishing boat,” Forones told The Associated Press by telephone. “But my fishermen did not really leave the area. We’ve spent so much money to travel there and they basically ignored the Chinese.”

Hernandez said it was the first time Chinese authorities had carried out such a hostile act against Filipino fishermen.

The militant fisherfolk group, Pamalakaya, questioned the timing of Bautista’s announcement of the Jan. 27 incident. In a statement, it said that the military should have made it public on the day the fishermen were harassed, not almost a month later.

Pamalakaya said Bautista’s report was “masterfully directed by the US government in vain attempt to exploit the conflict and advance the agenda of the US to check Beijing’s increasing role in global politics and pursue US global hegemony.”—With reports from Christian V. Esguerra, Nikko Dizon and AP