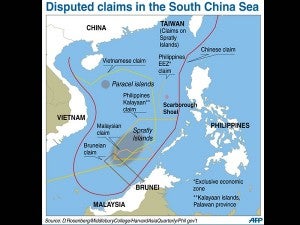 The nearest landmass from the shoal is Palauig in the province of Zambales, or 220 kilometers east. It is a source of rich fishing grounds that is well within the country’s 200 nautical-mile exclusive economic zone. China also claims the area. The Philippines brought its dispute with China to arbitration under the United Nations Convention on the Law of the Sea.

Zagala said there was no problem on the transfer of jurisdiction despite the proximity of Scarborough from Wescom as “these are all at sea.”

“The [Wescom] has the necessary assets that can address territorial defense and monitoring. They have the necessary aircraft that can fly to all these areas for the purpose of monitoring and reporting to higher government office,” Zagala said.

“This is for the purposes of unity of command, unity of effort under one commander and all external defense concerns,” he said.

The Wescom’s area of responsibility include Palawan and the disputed Spratlys. It also holds jurisdiction of Ayungin shoal (Second Thomas Shoal), a part of the Spratlys that is also claimed by China. Zagala said external defense matters is a “core competency” of the Wescom.