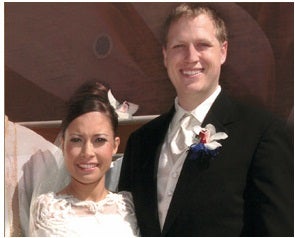 Cox, accompanied by her husband, Patrick Chamberlain, arrived at the Ninoy Aquino International Airport (Naia) around 10 p.m. and was met by members of Handicap International, one of the nongovernment organizations helping the disabled in Yolanda-affected areas.

The couple, both goodwill ambassadors of Handicap International, will visit Tacloban City and other typhoon-damaged areas to meet with people receiving help from the group.

“People are still recovering from the storm. They will need support for years to come. We’re excited to see for ourselves how Handicap International’s mobile rehabilitation teams are working,” Cox said.

She had a speaking engagement for the Ortigas Foundation Library in Pasig City on Tuesday, which also doubled as a fundraising event for PWDs and a documentary film being made about her.

“This visit will be like no other. I last visited my family in Eastern Samar in February 2013. Since then, the storm has claimed the life of my great aunt in Guiuan, and damaged each and every relative’s home in some way,” Cox said.

Handicap International, which has been operating in the Philippines since 1985, said Cox’s presence and messages were especially important in a country like the Philippines, where one in four Filipinos are affected by a disability.—Jerome Aning

Jessica Cox-Chamberlain Says I Do