Rising musical artist credits a childhood of creativity and freedom 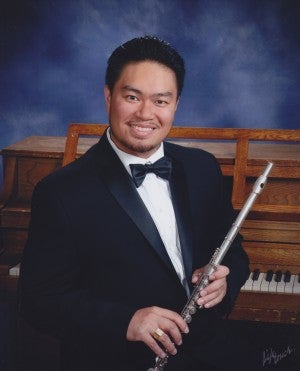 SAN JOSE, California–Musician Rogil “Ro” Birco has been really busy lately. He recently finished a show while preparing for two upcoming roles.  He just concluded his performance in “The Love Edition: Love Bytes” at Bindlestiff Studio in San Francisco where his zany character travels from the future.  In March, he will play a mariner in Shakespeare’s “The Tempest.”

The following month, he will be in a 1927 musical, “Good News,” playing Coach Johnson.  Both of his upcoming performances can be seen at the City College of San Francisco.

“A big source of inspiration for me was when I was invited to accompany on keyboard the up and coming Italian singer, Franciscan monk Friar Alessandro Brustenghi, in two concerts at the National Shrine of St. Francis in San Francisco in 2013,” says Birco. “His gentle humility, modesty and amazing tenor voice brought tears to my eyes.”

His childhood and upbringing essentially prepared him for a life and career in music.

While growing up in a highly academic-driven household, Rogil “Ro” Ambrosio Birco was also immersed in a lifestyle of creativity and freedom.  His biggest motivators were his Filipino parents.

His mother, an actress, director and scriptwriter during her career in Manila and his father, a trombonist in his native province of Cavite, encouraged young Ro to find his interest, pursue his passion and develop himself without too many parental pressures.

By age five, he was reciting his multiplication tables and swiftly gliding his pen across paper as he practiced his cursive handwriting.  A year later, he was never without pen and paper as he took up new hobbies.  He enjoyed writing and drawing like many other six-year-olds, but he also was interested in calligraphy.

“I actually enjoyed reading new words from the dictionary and knew all of the U.S. presidents up to George Bush Sr.,” recalls Ro.  “I was and continue to be a proud nerdy geek!”

Very mature for his age, he conquered the Iliad and the Odyssey, Greek epic myths usually taught at the high school level, and also developed a keen interest for music.  He began as a baritone horn player in his middle school band that launched a career of music ahead of him.

Recognizing himself as more of an instrumentalist, Ro said, “I enjoy being a musician because I get to show a daring extrovert side of myself that normally doesn’t come out every day.”

Ro loved music as a child and was particularly influenced by his “hero” Alvin from “Alvin and the Chipmunks.”  However, he didn’t start singing regularly until 15 when he was “coerced” into joining his church’s youth choir.  Shortly after, he picked up the flute and also started formally learning to play the piano.  He had a knack for music and was a member of the American Composers Forum high school music composition program.

He developed a strong liking for classical music, specifically the European baroque style.  From this genre, he branched out to jazz and swing styles.  He even gained an interest in gospel, R&B, and blues.

In three years as a member of the American Composers high school program, he composed three pieces, the first for woodwind quintet, the second for full orchestra, and the third for a mixed woodwind and string ensemble. In 2000, he received an Honorable Mention from the National Foundation for the Advancement in the Arts for his compositions.

As an artist Ro relies heavily on feelings to create a mood when he is giving a performance or composing a piece.  As a nature lover, he finds comfort and peace to write while meditating or taking time to be outdoors.  His Catholic background has also served as a source of strength through rough patches in his life, to help him cope and turn his feelings into lyrics or a melody.

“We artists live differently from other humans—really we do,” Ro chuckles. “Conformity is the antithesis of our being—we must continue to be original and daring, push boundaries, and speak for those without a voice.  Art has, can, and will continue to move mountains.”