globalnation /
‘DEVIL’S IN THE DETAILS’

Talks for US troops’ presence in PH still ongoing 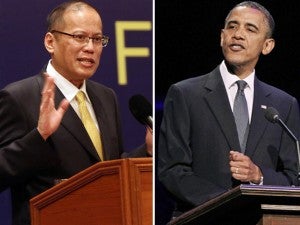 MANILA, Philippines—President Benigno Aquino III on Friday said details were being worked out for a framework agreement that would allow the increased rotational presence of US troops in the Philippines—but it was not being rushed for completion in time for the visit of US President Barack Obama in April.

President Aquino told reporters that meetings were currently being held to iron out details of the framework pact, “so that it adheres to the laws of both countries.”

“Since the negotiations started, the goal was to reach an agreement soonest. But we must make sure that the result does not violate the rules of both countries. We still have to iron out the details,” he said yesterday in an ambush interview in Pasay City.

“The principle that we want to uphold… is to come up with clear details. As they say, the devil is in the details,” said the President.

He made the clarification amid speculation that the pact was being rushed for signing in time for the US visit to Manila of Obama.

“[Talks] have yet to be concluded. There are still meetings on the details of this rotational presence to meet our needs and Americans’ needs,” he said.

Mr. Aquino said there were “nuances” but did not elaborate.

The added presence of US forces is expected to boost the Philippine’ position in its territorial row with China in the West Philippine Sea (South China Sea).

In a briefer, Malacañang said the IRP was the policy that “increases the presence of US forces on a rotational basis in Philippine territory toward the development of a minimum credible defense posture.”

This can be accomplished through “high-impact and high-value joint exercises, which promote interoperability and capacity building that will also bolster humanitarian assistance and disaster response.”

The IRP framework agreement addresses the current thrust of the Armed Forces of the Philippines, which is external defense.

On the question of whether or not the United States would come to the defense of the Philippines when attacked, the briefer says that “the United States has time and again stated that it will honor its commitments under the MDT (Mutual Defense Treaty).”