Kirstie Bennett, Guinness adjudicator in the Philippines, said that 175,000 participated in the 1.9 kilometer walk which started at the Cultural Center of the Philippines and ended near the Diamond Hotel in Manila.

The Philippines beat Singapore which held the previous record at 77,500 in 2000.

The figure was based on the number of wristbands worn by the participants and dropped in a box by the finish line.

Proceeds from the walkathon would go to Yolanda victims, which ravaged Central Philippines and claimed over 6,000 lives.

The walkathon was also held in 54 other provinces and 28 countries, including the Philippines. 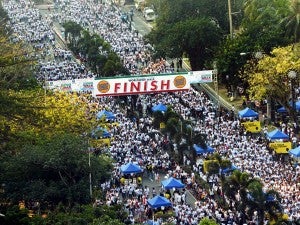 The charity walk is held in preparation for INC’s centennial on July 27.

The INC also hopes to beat the world record for largest charity work in 24 hours at a multiple venue. The announcement of the result is on Sunday.

Earlier on Saturday, Leyte representative Ferdinand Martin Romualdez said his constituency was “blessed that aid continues to come through the hard work of INC.”

“We are very thankful to … the INC for their huge participation in extending assistance to the survivors of Yolanda. This will surely help them recover and return to normalcy,” Romualdez said Saturday in a text message to reporters.

Eastern Samar Representative Ben Evardone said he “welcomed that initiative of INC to rally its members to support the Yolanda victims.”

“Aside from the funds that they will raise, the expression of sympathy gives hope to… the Yolanda victims to get back on their feet…” Evardone told INQUIRER.net in a text message.

The INC is known for its bloc system of voting during elections, making the religious sect a crucial vote for politicians.